Review of Asia's Cauldron: The South China Sea and the End of a Stable Pacific by Robert D. Kaplan

Book can be found in:
Genre = Politics
Intriguing Connections = 1) Get To Know This Worlds' People, Regions, Cities, Nations, and Empires  (History of Multiple Asian Nations), 2) How Products Shape and Change the World, 3) War 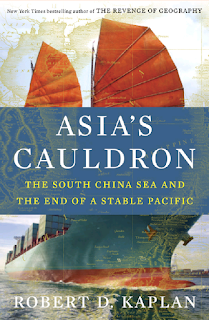 China is a rising economic power.  Economically developing countries trade internationally and obtain global interests.  Military might is needed to protect global interests which are based on capitalist prosperity.  South China Sea is important because beneath the various small islands lies oil and natural gas.  Many of the surrounding states have claims on the waters which are in conflict with China’s claims.  The states require the United States for diplomatic and military support.  To reconcile disputed seas will require hard power.  This battleground has no enemies which could be an object of moral fury.  This battleground is for economic reasons.  Showcasing how US guards the global commons of communications which allow for international trade.

Kaplan makes clear that national values need to be guarded by military power.  Navies are getting more prominence in the South China Sea than armies.  It is more difficult to occupy lands with navies than armies.  Wars can start through petty incidences which are tied to vital interests.  In this case, its territorial disputes and energy supply.  What makes the issue unnerving is China’s buildup of submarines, which is a clear indicator of aggression.  To showcase what the situation is, Kaplan uses brief histories of Vietnam, Singapore, Malaysia, and Philippines.

A very important topic mired in problems.  The flow of the writing is usually not that good.  There is a confirmation bias against China and in favor of the US.  Seeing China as an aggressor which needs to be contained, while US as defender of world interests.  Although the author indicates minor US transgressions, there is a neglect of the many large US aggressions in world affairs.  The values of US are above reproach in this book as they are so wonderful that other countries would not accept them unless the US to uses military might to enforce them.  As in the author claims that China’s power is influencing international decisions that are less than voluntary, but no reference to what the US does with its influence because of its military power.  Other than aggression and supporting some countries economically, China does not appear to have any positive qualities.  Given that China also depends economically on other nations, the author does not even raise the possibility that China would also be willing to protect world interests.  The book looks at events from strictly divisive perspective which leads to conflict.  Conflict can arise and the author does a wonderful job at discussing the why, but without attributing much reference to potential conflux of international affairs, leave the reader with the mind that war is unavoidable.