Review of When Doctors Don't Listen: How to Avoid Misdiagnoses and Unnecessary Tests by Leana Wen, Joshua M. Kosowsky

Book can be found in:
Genre = Science, Health Resource 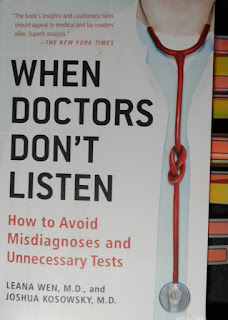 To diagnose what a patient has requires more than just what the doctor sees, feels, or tests.  It requires the voice of the patient.  The history of the ailment is extremely important to understand what may be causing it.  When doctors don’t listen to their patients, they start to order unnecessary tests and worse still, misdiagnose the problem.  Rather than listen to their patient, doctors rely on pathways, cookbook algorithms that rule out possible causes which doctors believe will reduce the chance of malpractice suits.  But by over-relying on cookbook algorithms and unnecessary tests, they not only create undue stress, but misdiagnose and take more time to get to the appropriate diagnoses.  This is a book for patients to learn that they are partners in their heath care, and for doctors to understand that the patient’s voice is a very valuable source of vital information.

A vital part of medical care is the diagnosis.  The diagnosis is what the patient has that needs to be treated.  Communicating the history of the symptoms and related info provides the doctor with resources to make the diagnosis.  When doctors don’t listen, they do not obtain the information that can make a change the possible diagnosis.  If a diagnosis doesn’t make sense, the patient should help the doctor perform a commonsense check, to make sure the symptoms align with the diagnosis.  Better to rectify a misunderstanding earlier than to get pulled into a wrong diagnosis.  A diagnosis is not the ruled out worst case scenarios.  This book provides a guideline how patients can better communicate with their doctors, and for doctors to learn how to better understand how to talk with patients.

The history of medicine had practitioner engage with the patient to alleviate the patients’ ailments.  The techniques were inferior and specious, but the care in partnership with the patient and directed at alleviating patients’ woes.  During the 20th century, doctors have gotten two updates which are, 1) a lot more technical tools to use, 2) more formalistic approach to medicine.  With the ability to run tests easily, doctors started to use testing rather than rely on patients’ medical history.  Tests are used as proxy for decision making rather than to supplement decisions.  The cookbook formalistic approach was meant to make the system more systematic and efficient, but doctors started to use the pathways to rule out possible ailments rather than focus on what the patient actually has.  In combination, doctors order unnecessary tests and misdiagnose causing massive inefficiency and lowering medical care quality.  Rather than diagnoses, the doctors tell patients what they do not have.

Part of the reason that doctors order unnecessary tests is out of defensive medicine.  Doctors order many tests to make sure that they are covered.  As in the tests and routines are thought of as protecting the doctor from malpractice lawyers, as the doctor can claim they followed the standard of care.  However improbable a particular diagnosis is, fear of missing the improbable dominates decision making to the exclusion of patients best-interest.  This system leads to over testing and under diagnosing, with the irony of more suits.  What reduces malpractice suits is actually listening to what the patient has to say and treating them as partners in health.  Tests themselves carry risks such as a CT scan puts the patient under a lot of radiation that increases the risk of cancer.  Patients should ask questions about the tests and of there are alternatives.

Cookbook medicine is when a doctor follows a strict algorithm, a pathway.  Problems start to occur when the doctor listens for a chief complain to use for a pathway, without listening for more information.  Emphasizing the chief complaint without additional information leads to misdiagnosis because the pathway chosen is not tailored to any given individual.  Chief complaints are usually used as a starting point to rule out ailments rather than diagnose the actual ailment.   When a patient is on a pathway, it obtains inertia, making it hard stop following the pathway as it then requires more justification to stop.  Pathways themselves miss a lot because it is a focus on a singular problem, rather than considering all potential problems.

Technology and pathways are useful given that the doctor actually has information which indicates the appropriate diagnosis in which case following procedure is best which leads to testing for particular ailments rather than ruling out ailments.  The authors of this book are not asking for patients to mistrust doctors, that technology is useless or should not be used, or that routine has no place in medical practice.  Doctors’ knowledge and experience, technology, and routine have a lot of use when put into appropriate context.  But by not seeing the patient as a partner in health, medical tools are not only less effective, but can be detrimental.

Questions to Consider while Reading the Book
•What is the raison d’etre of the book?  For what purpose did the author write the book?
•Why do doctors not listen to patients?
•Why do patients not question doctors?
•How is a diagnosis made?
•What role does medical history have in a diagnosis?
•How should patients engage their doctors?
•Why do doctors get sued? What changes their chances of being sued?
•Why do doctors rely on tests?
•Do test find what is causing the patient problems?
•Why do doctors use pathways, cookbook medicine?
•What are chief complaints used?
•Why should doctors listen to their patients?
Book Details
Edition ISBN:  9781250048486
Pages to read:   300
Publication:     2014
1st Edition:      2014
Format:           eBook
Ratings out of 5:
Readability    5
Content          5
Overall           5
at April 09, 2021