Review of Desert Queen: The Extraordinary Life of Gertrude Bell: Adventurer, Adviser to Kings, Ally of Lawrence of Arabia by Janet Wallach

Book can be found in:
Genre = History, Empires
Book Club Event = Book List (07/22/2023)
Intriguing Connections = 1) Biographies: Auto, Memoir, and Other Types, 2) Relationships, Right?,
3) Get To Know This Worlds' Peoples, Regions, Cities, Nations, and Empires (United Kingdom, Ottoman Empire, Iraq),
4) War, 5) The Motive, Method, Ideology, and Consequences of Intervention,
6) Why Conflict Occurs And How To Resolve Them?, 7) What It Means to be an Activist 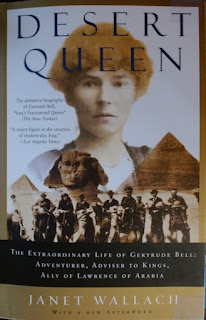 “Whatever happened, the British needed Iraq.  Its huge grain supplies could feed the army, its proximity to oil could fuel the navy, and its location put it at the center of the land route to India.  Mesopotamia, it was hoped, would be the place where the British could stave off the Turks by setting the Arabs against the Ottoman army.” – Janet Wallach, Chapter 15: Escape to the East, Page 155

“Tribal organization remained as it had been for a dozen generations, since nomad tribes had wandered north from Arabia; the power of the sheikhs deeply rooted, tribal laws and customs held sway and tribal blood feuds provided the excuse for constant and bitter revenge.” – Janet Wallach, Chapter 16: A Remarkably Clever Woman, Page 164

“Wilson’s tactics were too harsh, Gertrude believed.  In fact, they functioned like a pressure cooker: the more he bore down on the insurgents, the more their fury increased.  But Gertrude was in the minority.  At the office she was shunned for being too soft on the Arabs; Wilson spoke to her brusquely and refused to eat with her in the mess.” – Janet Wallach, Chapter 26: The Clash, Page 267

Gertrude Bell was a world adventurer, intellectual, author, and diplomat.  Throughout the adventures, Gertrude was attracted to the deserts, to the Arabic world, to Baghdad.  Gertrude learned the language, political aspects of the society, and the tribal politics.  Earned the trust of many societies, and gained allies.  Gertrude’s activities got the attention of various politically important people.  As a skilled diplomat, Gertrude radiated confidence in any conversation with anyone no matter the place.  Gertrude provided information, but gathered more.  Leaders were willing to share information with Gertrude, because Gertrude earned their confidence.  This made Gertrude an important source of intelligence, especially during war affairs.  Many offices wanted Gertrude, but none could replace Gertrude for Gertrude understood the language, politics, and had the confidence of the communities.

As the Ottoman Empire was disintegrating, many regions sought sovereignty.  Iraq was such a region.  Iraq did gain independence from the Ottoman Empire, with the help of the British.  The British Empire guarded the Arab Government from being overthrown by other Arab leaders.  Iraq’s leader, Faisal, had to balance extremists who did not want foreign rule, while knowing the difficulties without the British.  British did not want to give up Iraq, because they wanted control of Iraq’s oil.  With rebellions, and their retaliations, negotiations recognized Iraq’s sovereignty.  Gertrude was essential in defining Iraq’s borders and political structure.

Gertrude Bell had wanted to have a life partner, like other women of the era.  But Gertrude had a personality that was curious, knowledgeable, blunt, and audacious.  Gertrude’s attitude did not appeal to many.  Those who Gertrude did appeal to, were readily dismissed because they did not have the qualities that Gertrude’s desired in a partner.  There were few men who had the qualities that Gertrude sought for in a man, who also loved Gertrude, but society, circumstance, or tragedy prevented a union.

Gertrude lived in an era and place were Gertrude believed that women did not see themselves equal to men, but Gertrude thought otherwise of Gertrude.  Gertrude believed that the men and women had different roles.  Women for managing children, men the country.  Women were rarely knowledge enough to contribute to state affairs.

Gertrude would think of Gertrude’s father often.  Gertrude was financially supported by Gertrude’s father.  Who’s fortune had come from industry.  Even when Gertrude got an income from the British, it was meager.  Supplanted by a family allowance.  With family business in decline and finances being difficult, Gertrude had to become a bit more fiscally responsible.

Britain’s power came from navy, trade, and access to resources.  During the era, the British Empire took upon themselves to protect the various peoples of the world.  To spread their morality.  They did not think other nations would do that.  Bell family contributed greatly to the British Empires might, and were proud of their efforts to maintain that position.  Gertrude was an atheist, whose faith was the British Empire.  A conviction that the British are meant to lead the world.

Gertrude understanding of various political entities provided for valuable information.  Gertrude’s reports were studied in London, and Cairo.  Studied by military and foreign offices.  When preparations for war (WW1) were being made, Gertrude recommended organizing Arabs against the Turks.  Gertrude wanted to be present in the East, but permission was denied for some time because the situation was considered too dangerous for a female.

When traveling Arab lands, Gertrude did not consider Arab unity possible.  Tribal affairs contained a lot of violence.  But the war depended on the Arabs, and changing political circumstance made Arab unity possible.  As Ottoman economy floundered, they had increased taxation on Arabs, which was also accompanied by inflation.  Although Ottoman threatened the Arab leadership, Ottoman military was thinly spread with too many costly wars which relied on Arab recruits.  Turkish was chosen as the official language, which angered those who spoke Arabic and considered Arabic the language of Islam.  Non-Turkish associations were shut down.  These factors culminated in Arab resentment against the Turks.  With the British Empire at war with Turks, the Arabs were considered potential allies against the Ottomans.

The Arab decision between aligning with Turks or the British was difficult.  Turks were unpopular occupiers, but were Muslims.  The British offered a different political direction, but were Christian, and against whom a holy war might be called.  What the British needed was a leader who was independent and sympathetic to the British.

Iraq was a strategic ally, that the British needed to keep.  Iraq had productive agriculture, oil, and was a trade route to India.  Gertrude came to Iraq early 1916, for information gathering and as a liaison between various groups in need of that information.  An unofficial position for the British to gather information, and gain Arab cooperation.

Gertrude information gathering had been paramount, so much so that many offices wanted Gertrude.  Even Lawrence (of Arabia) was hoping to bring Gertrude back to Cairo.  Gertrude appreciated the work in Basrah more than Cairo.  The material was firsthand rather than a desk with paper work.  Nobody was more qualified that Gertrude due to Gertrude reading and speaking fluent Arabic, as well as local politics.  Much of the information came to Gertrude via those whom Gertrude befriended and whose trust Gertrude earned.  Without Gertrude, the sources would not come.  Gertrude did not want to leave at one point because the situation was critical, and Arabs would have thought Gertrude to be deserting them.  Locals considered Gertrude to be El Khatun (the Lady.)  Gertrude knowledge overcame sexist claims.

In the aftermath of WW1, various regions had wanted sovereignty.  Wanting independence, and recognition of their governments.  Even using President Woodrow Wilson’s phrase of “the right of self-determination.”  Arabs no longer feared the return of the Turks as much, for their concern was for who should lead them, and by which process.  Before, Arabs worried about British rule, but began to worry about how to rule themselves.

British, French, and American forces could not have won the war without oil.  Oil had become a strategic necessity.  Oil was needed for national security.  They had wanted to keep control of the oil supplies.

As Gertrude knew the regions better than most, given Gertrude’s prior adventures, Gertrude defined the borders.  Gertrude was integral in the construction of a brand-new state.  Before then, there was no independent Iraq, as a political entity, or with an administration.  Gertrude also determined Iraq’s leadership, government style, citizens, and laws.  This would become an asset for England, and an entity for Arabs.

Iraq wanted sovereignty.  Negotiations were tricky due to British refusal for constitution proposals on one side, and nationalist extremist propaganda on the other side.  Conflict and violent demonstrations ensued.  British response to the rebellions was harsh.  Insurgents imprisoned, leaders deported, residents evicted and their homes destroyed without allowing an option for rebuilding them.  A punishment used many times.  The British response incited more fury.  Gertrude was antagonistic to such an approach, but was in the minority, and thought of as being soft.

Faisal was chosen as Iraq’s leader, after fleeing Damascus.  Faisal was integral in creating an Arab Government in Damascus.  But after two years, France refused to recognize the government’s sovereignty.  The French sent military forces into Damascus, which Damascus could not resist.

As King, Faisal relied on Gertrude’s advice.  Advice on crucial topics such as Churchill’s ultimatum.  The Arab Government had to either accept independence, but with British control.  Or the British would leave.  The British protected the Arab Government, protected Faisal from opponents that would otherwise overthrow Faisal.  Without British protection, the territory would become fought for by various others who wanted the land.

Faisal understood the complexity of the situation.  Due to negotiating with the different sides, remained quick to change one’s mind.  Faisal needed the British, and accepted the mandate.  But due to pressures of those trying to make Iraq equal to, rather than subordinate to the British, Faisal changed Faisal’s mind.  Churchill’s mandate was required given Iraq’s status under international law.  Faisal negotiation difficulties came from trying to reassure extremists to prevent them from rebelling, and that Faisal was not recognized by the British.  What enabled acceptance of the mandate, was Churchill’s claim to have Iraq admitted to the League of Nations.  Which meant sovereignty for Iraq.

Gertrude was humble about the role Gertrude had in the development of Iraq.  Felt that the Arab Government gave Gertrude appropriate use of Gertrude skills.  Understood the delicate confidence Gertrude had earned.

The details provided lack depth.  They provide the contours of what Gertrude did, but not the specific details that created the forthcoming outcomes.  Sometimes transitioning between Gertrude’s life too quickly, without much explanation of the transitions.