Review of The Blank Slate: The Modern Denial of Human Nature by Steven Pinker

Book can be found in:
Genre = Psychology
Book Club Event = Book List (04/01/2023)
Intriguing Connections = 1) Why Do People Think Differently?, 2) The Evolution of Evolution 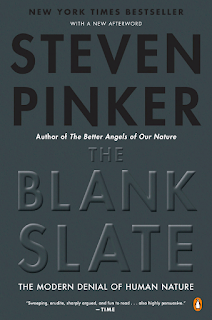 “Every society must operate with a theory of human nature, and our intellectual mainstream is committed to another one.  The theory is seldom articulated or overtly embraces, but it lies at the heart of a vast number of beliefs and policies.” – Steven Pinker, Part I: The Blank Slate, The Noble Savage, and the Ghost in the Machine, Page 28

“The Blank Slate has also served as a sacred scripture for political and ethical beliefs.  According to the doctrine, any differences we see among races, ethnic groups, sexes, and individuals come not from different in their innate constitution but from differences in their experiences.  Change the experiences – by reforming parenting, education, the media, and social rewards – and you can change the person.” – Steven Pinker, Chapter 1: The Official Theory, Page 31

“The mind is a complex system composed of many interacting parts.” – Steven Pinker, Chapter 2: The Last Wall to Fall, Page 72

Each society has a theory of human nature, which is rarely referenced, but shapes beliefs and policies.  Theories of human behavior range from mainly genetics to mainly social constructs.  Human behavior is shaped by nature and nurture.  Evolution coded in genetics has limited resources and ability to anticipate various complex situations, therefore cannot do everything.  Nurture coded in social constructs have physical limitations, therefore cannot do everything.  There are contexts which can be explained with mainly nurture or nature.  Social constructs like language are nurture, while genetic disorders are nature.  Within most contexts, nature and nurture work together.  There are complex interactions between genes and their environment.

The blank slate is a reference to an extreme nurture view of the human mind.  That the human mind has no inherent structure, in which society and the individual can inscribe values.  Differences in behavior come about through differences in experiences.  By changing the experiences, can the individual change.  This implies that problematic behavior can be ameliorated.  There are limitations within this perspective.   Blank slates cannot do anything because they would not have the innate circuitry for learning or understanding.  While culture shapes thought, thought could not come about without a biological entity capable of learning.  Humans are biologically distinguishable, and are constrained in their choices.

More On Evolution, and the Blank Slate:

Genes cannot provide a complete blueprint.  They have limited resources, which means can only be so big.  Genes cannot anticipate the complexity of the environment and behavior of other genes.  To compensate, genes have developed a program that enables learning mechanisms such as feedback, which generate information with which to adjust behavior.

There are many limitations of the blank slate perspective.  The mind creates a model of the world, but the model is based on the physical world.  It takes a perceiver with information to decipher patters, combine patters with priory learned patterns, and use them to obtain new thoughts that guide behavior.

Humans have the capacity to learn, and interpret information if a myriad of ways.  With finite information processing, can an infinite range of behavior be generated.  Culture is a cumulative pool of information that enables coordination of expectations about each other’s behavior.  Genes do not create cultures, but cultures do not impact formless minds.

Recognition of biological differences has caused many unfavorable conclusions such as prejudice, Social Darwinism, and eugenics.  Biological constraints prevent complete reshaping of human behavior, and can be seen as deterministic.

The claims about nature and nurture are sensitive topics, which garner controversy.  The author attempts to provide a more appropriate and neutral explanation for how they shape human society.  The problem is that the way in which the book is written, is not favorable to neutrality.