Review of Empires of the Word: A Language History of the World by Nicholas Ostler

Book can be found in:
Genre = History
Intriguing Connections = 1) How Information and Books Survive the Test of Time, and How They Change, 2) Get To Know This Worlds' People, Regions, Cities, Nations, and Empires  (History of Multiple Regions), 3) To Cooperate Or To Defect?, 4) How Products Shape and Change the World 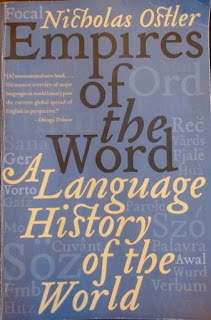 Watch Short Review
Excerpts
“Yet all the while its language was changing from Akkadian, the age-old language of its rulers, to Aramaic, the language of the nomads it was reputedly conquering” – Nicholas Oster, Chapter 1: Themistocles’ Carpet, Page 13
“A language brings with it a mass of perceptions, cliches, judgements and inspirations.  In some sense, then, when one language replaces another, a people’s view of the world must also be changing.” – Nicholas Oster, Chapter 1: Themistocles’ Carpet, Page 13
“If a community has problems propagating its language, there must be a social cause, not a linguistic one.” – Nicholas Oster, Chapter 2: What It Takes to Be a World Language; or, You Never Can Tell, Page 23
Elaborate Review

Language is how knowledge is transmitted, how memories are preserved.  Binds a people together by means of communication.  To understand how languages can change, requires an understanding of how languages have changed.  Many languages which were once thought to be permanent or dominant, have been overtaken or vanished with time.  This book focuses on how languages spread to other regions which spoke different languages.  How the language communities persuaded others to speak their language.  A language brings with it many aspects of how the people perceive themselves.  When the language changes, the people perceive themselves differently.  Languages persist even when the speakers have changed.  Beyond the confines of any particular state or region.  Languages symbolize an identity, while also changing and reacting to new realities.

To reach wider communications, the language needs to be taken up by people who are not native speakers.  The main ways that languages have spread is by people moving to different regions and brining their language with them, or by assimilating people they have contact with, or a combination of the two.  Some languages are only known because of foreigners who spread the language, rather than because of the native speakers.  Some languages have maintained their stability even while under foreign influence.  Within some regions, people became multilingual, either to communicate with neighbors, or to dignify court, religion, or commerce.

Languages showcase the impacts of cultural relations.  With many ironies involved such as conquerors taking up the language of those they were supposed to be conquering.  Showcasing the different types of languages, and how people interact with it.

The book can be a bit difficult to read.  Provides a world history, but will need more information on the peoples showcased to create an understanding of the people.  As this is a language history book, the author is biased in favor of the language factor and aspect of civilization over other factors.