Review of Charlie and the Chocolate Factory by Roald Dahl 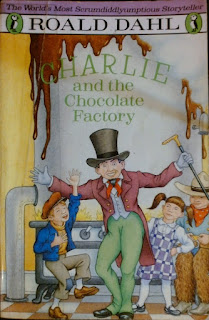 Willy Wonka is the greatest chocolate maker in the world.  Wonka created many inventions deemed impossible.  But was going to be ruined by spies taking Wonka’s secrets.  In response, Wonka closed the chocolate factory.  After some time, when the factory was reopened, the chocolate factory made its dazzling chocolate varieties, but nobody went into or out of the factory.  But later on, Wonka decided to let in 5 children to tour the factory.  The children will be those who got a Golden Ticket.  For those with a Golden Ticket, meant not only a tour of the factory, but a lifetime supply of chocolate, and a special prize to one of them.  The world was in fervor trying to get the tickets.  One of the Golden Ticket’s, miraculously went to Charlie Bucket.  Whose family was subsisting on a very small income.  A small income that needed to be shared by seven people.  Barely could afford Charlie’s only Wonka Bar a year for Charlie’s birthday.

This is a story teaching morals.  Showcasing how to act and behave appropriately.  That being humble and listening are rewarded.  That acting out without considering the consequences leads to terrible results.  That thinking differently facilitates curiosity about things that others would deem impossible.

The book is really easy to read.  This is a children’s book, and forces a suspension of beliefs about what is possible.  With some event sequence inconsistencies.