Review of Capitalism: A Conversation In Critical Theory by Nancy Fraser, and Rahel Jarggi

Book can be found in:
Genre = Economics
Intriguing Connections = 1) Capitalism, Socialism, their Alternatives and Critiques,
2) What Goes Into An Economic Crisis? 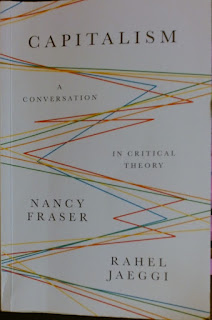 “One problem, as you said, is the multi-dimensionality of the present crisis, which is not only economic and financial, but also ecological, political, and social.” – Nancy Fraser, and Rahel Jaeggi, Introduction, Page 10

“This status differential is forged politically.  The paradigmatic agencies that afford or deny protection are states.  And it is largely states, too, that perform the work of political subjectivation.  They codify that status hierarchies that distinguish citizens from subjects, nationals from alien, entitled workers from dependent scroungers.” – Nancy Fraser, and Rahel Jaeggi, Chapter 1: Conceptualizing Capitalism, Page 42

There are many different types of capitalist societies.  The form of capitalist that has existed, created many crises within society.  Crisis stems not just from a part of the economy, but a pervasive crisis.  More than an economic crisis, as social order is breaking down, and environmental problems are being exacerbated.  Capitalism is described as a class division between owners and producers, has institutional markets for wage labor, accumulation of capital, and market allocation of inputs and surplus.  Exchange occurs not through voluntary exchange, but through exploitation.  Creating various inequalities.  This book is a conversation between the authors, and what they try to discuss is how the economy works, rather than just the outcomes of the economy.  They do not want to blame everything ill on capitalism.  Nor do the author want to get rid of all capitalisms functions as that has led to disaster when tried.

Capitalism requires constant accumulation.  Ever expanding capital.  Not expanding leads to falling prey to competition.  Accumulation is achieved via exploitation.  Not voluntary exchange, but by non-compensation of those less powerful.  But the authors do not want to return to pre-capitalist’s world, removing all capitalistic functions.  As capitalism had many advantages over its predecessors.  Economic systems might create the status of people, but states forge politically the status of peoples.  It is states that codify the inequalities.

Part of the story is inequality.  As few have stable lives and sense of well-being, but the majority do not.  They point out many contradictions in capitalistic ideas such as free workers.  Able to choose whether to work or not, but vulnerable in how they get and retain work.

The authors recognize many limitations of their work such as a lack of multidisciplinary studies, the need to engage with the opposition on legitimate claims, not blame everything on capitalism, and that alternatives can be worse than capitalism.  The problem is that the authors recognize these limitations, but do not do much to address them.  Spending more time and addressing these known limitations would have strengthened the arguments and made them more accessible to a broader audience.

The book’s audience are people who already agree with many of the claims that the author have on the problems with capitalism.  In its polarizing way, the book is going to have a hard time convincing those who disagree with the claims.  Using a lot of Marx’s language limited the reach of the views as well.

As the authors focus on the problems of capitalism, they missed historical similar features in a pre-capitalism world, that would have been recognized in a multidisciplinary study.  Even before capitalism, there were trends for accumulation, such as with empires and religion.  Empires and religion need to expand, or be overtaken by competitors, which ad caused a lot of wars.

The book described many social divisions and blame them on capitalism, but they have existed before capitalism.  There is a very human want to belong to a certain group, and identify with it.  Which creates the problem of favoritism, that has the consequence of making others worse off.  Non-capitalistic societies have these features of inequality as well, and worse.