Review of Boss Tweed: The Corrupt Pol Who Conceived the Soul of Modern New York by Kenneth D. Ackerman

Book can be found in:
Genre = History
Book Club Event = Book List
Intriguing Connections = 1) Get To Know This Worlds' People, Regions, Cities, Nations, and Empires  (United States of America), 2) To Cooperate Or To Defect?,
3) Biographies: Auto, Memoir, and Other Types 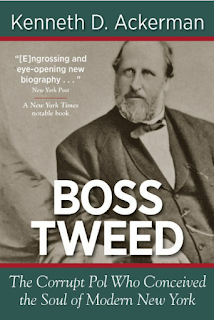 Watch Short Review
Excerpts
“He left a strange puzzle.  Except for his stealing, Tweed would have been a great man; but had he been honest, he wouldn’t have been Tweed and would not have left nearly so great a mark.” – Kenneth D. Ackerman, Chapter 1: Alone, Page 8
“Tweed had to go.  Someone had to take him down, but at the right time and I the right way, skillfully, with the proper hands on the weapon.  Meanwhile, Tilden saw the Boss grow only more popular: Clubs in his honor popped up all over town.” – Kenneth D. Ackerman, Chapter 5: Park Row, Page 103
“It seemed like a great fee ride, especially for the banks and brokerage houses making huge commissions on the bond sales.  Tweed economics – borrow, spend, and keep some for yourself – made sense to New Yorkers.” – Kenneth D. Ackerman, Chapter 9: The Wedding, Page 144
Elaborate Review

William Tweed, known as Boss Tweed, was a commissioner of Public Works, and state Senator.  A corrupt politician who controlled judges, mayors, governors, and newspapers.  Before proof of corruption was made, political enemies or lawyers were not able to take on Tweed.  Tweed was supported by the public, and would require a popular uprising to take power away.  Corruption was ubiquitous in the political system, and corrupt officials legitimized and supported Tweed.  The problem is that those within the corruption Ring, did not want to become scapegoats for everyone else’s corruption.  When political favor changed, they turned away from Tweed, and aided those trying to expose and clean up Tweed’s mess.  At the end, even Tweed had disclosed what had been done.  The bribes given.  The manipulation of elections.  Systemically diverting public funds.  All this was done during a time when corruption was routine.  What Tweed did for the city, would not have been possible without engaging in corruption.  Otherwise, Tweed would be honest, but unable to enact change.

Tweed was physically imposing, and used to physical violence.  Tweed even led a local gang.  Then joined a volunteer fire squad that within a few years made Tweed foreman.  This was the start of Tweed’s political career, as Tweed was able to produce votes on Election Day, and provide strong-arm bullies.

Tweed rise came during the American Civil War.  New York had a large anti-war Democrat movement.  During the time, New York also had many immigrants, primarily Irish, who did not see honor in the war, and had no quarrel with either side.  The war in New York was seen as a rich man’s war, because while the rich could avoid the draft by paying a fee, a fee that most people could not afford, causing the poor to fight on behave of the rich.  Lincoln rejected New York major’s appeals against the draft.  All the while Tweed positioned Tammany to support the Union, while also providing support for the grieving, making Tammany credible to everyone.  Although Tweed’s recruitment drive was scandalous, it was not nearly as corrupt as many other corruption cases.

Even before Tweed, New York democracy was corrupt.  Stuffing the ballad box with votes for a particular candidate through bulling and lying.  Producing way more votes than there were eligible voters.  Many who would perceive themselves as honest, did not mind vote manipulation or graft on city contracts.  Tweed would claim that the city was so politically fractured that it would be too difficult to govern under universal suffrage.  That it could be governed by bribery.

In public office, what Tweed did is provide a lot of jobs and incomes to many people.  Creating many public projects.  In private life, contributed to charity.  Although everyone assumed corruption, it could not be proven.  And with what Tweed was providing, Tweed became more popular.

Tweed created a system to keep Tweed and supporters in power for longer.  Controlling where they spent money, and who would become a public official.  Tweed was able to finance much of the works through bonds.  It made sense to New Yorkers, and the banks and brokerage houses that made commissions on the bond sales.   Borrowing, spending, and keeping some for personal use.  But the international community started to see problems.  Credit was still available, but became more cautious.

A major source for trouble for Tweed was George Jones, at the New York Times.  What started the fall for Tweed were not the attacks from the New York Times, but the legitimization of the claims made by public accounting records.  At a time before records were available for the pubic to see, these public records were copied little by little by an insider.  What the accounts showed is a huge discrepancy between what the money was used for, and the amount paid.

As the notoriety grew, Tweed’s ring needed someone to blame.  The problem was that the scapegoat selected, did not want to be a scapegoat.  George Barnard had decided to help fight the corruption, to make Barnard morally appealing.  Others, like comptroller Richard Connolly, also decided to help fight the corruption.  It was treachery that broke the Ring, rather than an outside force.

The book is easy to read that is very informative on the history of New York during the era.  The problem is that the book’s focus is on the fall of Tweed.  With very little on the rise and the spoken of benefits provided.  More information on the rise of Tweed and how corruption was maintained would have facilitated a better understanding on the situation, and made behaviors that enforce corruption easier to spot.