Book can be found in:
Genre = History
Intriguing Connections = 1) The Entrepreneurial Spirit, 2) Biographies: Auto, Memoir, and Other Types, 3) How Products Shape and Change the World 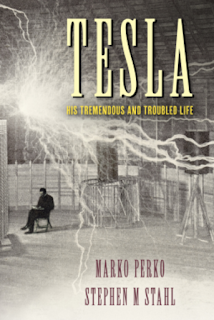 This book is more than just what Tesla’s ideas and inventions contributed to how life is lived, which was so immense that they are ubiquitous.  This book is about who Tesla was, the psychology and culture that made Tesla such an eccentric.  Starting with a childhood which prepared Tesla to reason and think critically.  But a family tragedy, caused childhood trauma that would shake the foundation of the family and impact Tesla’s psychological makeup.  During Tesla’s whole life, there were psychological problems.  The specifics are not known, but Tesla had troubling hallucinations, long periods of depressions, and manic states.  It was during the manic states that Tesla was most productive, and produced the most innovations.  Tesla had periods in which there were too many ideas flowing around that it was a challenge to slow them down, while other periods with barely any.  Tesla’s cultural background instilled a desire for Tesla to invent useful things that can help others.  To better humankind.  For those ideals, Tesla often chose principles over profit.  That caused many financially difficult periods.  An idealism that made Tesla a bit naïve when dealing with people, as many have betrayed Tesla.

The book’s narrative lacks a bit of flow, making it more difficult to read.  A writing style issue is with how the authors describe history, as predetermined, that the events that happened were inevitable.  This is problematic because there was a lot of uncertainty to the outcomes of events during the time, which the authors sometimes mention.

Although Tesla’s inventiveness, ingenuity, and intellect cannot be denied, Tesla did not do everything alone.  The authors focus on Tesla as a sole and solitary genius, which is the case, but that is not the whole of what made Tesla so great.  Tesla saw how the available technology could be used and made extraordinary improvements and inventions.  There were many technological ideas that Tesla had that would not be proven or become practical until after Tesla’s death.  But all those ideas had others, who may not have had any of Tesla’s abilities, but were able to compete and complete the technology.