Review of On Liberty by John Stuart Mill

Book can be found in:
Genre = Philosophy, Epistemology
Book Club Event = Book List
Intriguing Connections: 1) The Persecuted and The Persecutors, 2) How to Teach? How to Learn?,  3) To Cooperate Or To Defect?, 4) Capitalism, Socialism, their Alternatives and Critiques,
5) How To Have A Conversation? 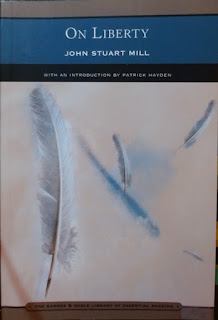 “Society can and does execute its own mandates: and if it issues wrong mandates instead of right, or any mandate at all in things with it ought not to meddle, it practices a social tyranny more formidable than ay kinds of political oppression, since, though not usually upheld by such extreme penalties, it leaves fewer means of escape, penetrating much more deeply into the details of life, and enslaving the soul itself.” – John Stuart Mill, Chapter 1: Introductory, Page 5
“The opinion which it is attempted to suppress by authority may possible be true.  Those who desire to suppress it, of course deny its truth; but they are not infallible.  They have no authority to decide the question for all mankind, and exclude every other person from the means of judging.” – John Stuart Mill, Chapter 2: Of The Liberty Of Thought And Discussion, Page 17
“Yet it is as evident in itself as any amount of argument can make it, that ages are no more infallible than individuals; every age having held many opinions which subsequent ages have deemed not only false but absurd; and it is certain that many opinions, now general, will be rejected by future ages, as it is that many, once general, are rejected by the present.” – John Stuart Mill, Chapter 2: Of The Liberty Of Thought And Discussion, Page 18

An attempt to define what power society has over an individual.  There is reciprocity between the individual and society.  Being part of a group has benefits, which individuals should be willing to adhere to the societies provisions whether they are legal, or are a tacit understanding.  Rules such as not to harm the interests of other members in the society.  But government and society can abuse their powers, and cause harm to those they are meant to support.  A key freedom is the ability to disagree, which usually has social and political consequences.  Ideas benefit from being tested by diverse opinions coming from a variety of human backgrounds and experiences.  By allowing dissent, the problems within the ideas can be recognized and then rectified, for no idea has a monopoly on truth.  Ideas and society benefit from considering different sources.  Society becomes more valuable with the diversity of experiences, the uniqueness of each individual.

Governments have power.  Power that can be used against enemies and citizens alike.  Limitations on that power are needed to prevent its abuse against the very people it is meant to support.  Preventative powers are especially subject to abuse.  When government restricts something, the restriction tends to apply for the outcomes that hurt and help people.  Another reason for a limitation on the interference of the government is to prevent everyone from becoming depended on government.  Looking to government for all of life’s answers means people cannot be free.

There are many ways to modify behavior than physical punishments.  Society itself can become a tyrant, through the use of public authorities, creating tyranny of the majority.  Social tyranny that can be more powerful than official authoritative power.  Society can impose extreme penalties, while limiting escapes, and effects how life is lived.  Individuals are accountable to their society for their actions and inactions which harm others.  Although accountability to inaction should be cautioned.

Action should not be as free as opinion.  Even opinions have limitations when they instigate mischievous acts.  Acts that harm others without justifiable cause, should be condemned to unfavorable sentiments and have an intervention.  To have a limitation is to prevent an individual from being a nuisance to others.

Those who disagree are possibly correct in their views.  Those who deny the views of others are not infallible.  Every era is as fallible as the others.  Every era had ideas which subsequent eras deemed false or worthy of ridicule.  Many ideas of the present are just as likely to be rejected by successors.  Many ideas deemed valuable have been previously persecuted.  Persecuting ideas can prevent them from spreading, holding back their understanding.  Ideas will perpetuate as long as those who espouse them are large enough to not be easily persecuted.  Nobody has the power or authority to decide what everyone else should think, or exclude them from judging for themselves.

Facts rarely speak for themselves.  Their meaning needs to be communicated.  Ideas adept to the times they are in.  Improving and mixing with other ideas.  Ideas might not be completely accurate, but they should not be silenced for all their errors.  It is within the collision of adverse opinion that the idea can gain accuracy.

Attempts to refute an idea is the very reason the idea can be deemed worthy, as they can be better than the alternatives.  The value of human judgment is to rectify the wrong ideas.  Ideas need to be challenged from varied sources, and diverse experiences.  As people who come from different backgrounds will engage with the idea differently.  There are many who value discussing ideas freely, but nevertheless hold some ideas as infallible, and arguments are inappropriate.

Support generally goes to those who argue in favor of an idea working, while disparaging those who are critical of the idea and point out its weaknesses.  The evolution of ideas depends on ideas that work, but thinking about the idea’s problems, errors, and practicality are highly valuable for what ideas survive.

To properly instruct future generations of most the valuable ideas and behaviors, there needs to be freedom of the press.  The ability to write and publish without restrain.  As this freedom will allow instructors to know what they need to know.   What prevents people from understanding some ideas is the lack of experience.  As experience makes the idea personal.  Other ideas are not understood because the individual was not prepared to understand them.  Ideas do need to be accustomed to.

Humans can develop better behavior over time.  By developing an individuality, the person becomes more valuable to oneself and others.  Diversity of human experiences brings more fullness to life.

The book can be very difficult to read partly because of the era in which it was written in, and partly because of style.  The author creates a lot of philosophical paradoxes.  While decrying intolerance to hearing alternative view, the author can be very intolerant to other views.  But the limitations with the book are subject to modifications, which can improve the ideas held within.

•What is the raison d’etre of the book?  For what purpose did the author write the book?
•What power does society have over an individual?
•What are the benefits of being in a group?
•What are some social rules?
•How and why do governments and society abuse their power?
•What is the freedom to disagree?  Why does it matter?
•How do ideas evolve?
•Why limit government power?
•What is the tyranny of the majority?
•What are the limits to behavior?
•What are the limits to opinions?
•Should ideas go to the extreme?
•What happens when certain views and ideas are persecuted?
•Which views are right and which are wrong?  How can someone tell?
•What views benefit and hurt society?
•How do humans change?
Book Details
Edition ISBN:  9780760755006
Pages to read:   136
Publication:     2004
1st Edition:      1859
Format:           eBook
Ratings out of 5:
Readability    2
Content          5
Overall           4
at February 11, 2022