Review of Alexander the Great: A Historical Biography of History's Greatest Military Commander by Philip Egenes

Book can be found in:
Genre = History, Empires
Intriguing Connections = 1) Biographies: Auto, Memoir, and Other Types,
2) Get To Know This Worlds' People, Regions, Cities, Nations, and Empires  (Macedonia) 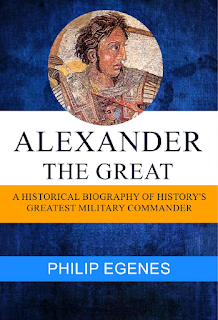 Alexander the Great was a Macedonian ruler who influenced a vast stretch of the world.  This is a book about what made Alexander the person Alexander became.  The upbringing, the cultural background, and some major military achievements.  Alexander’s mother Olympias, gave Alexander a sense of purpose and destiny.  An ambitious attitude that made Alexander serious.  Alexander’s father Phillip II, taught Alexander to be competitive.  Alexander became eager to make oneself better, to prove to Philip what Alexander was capable of.  It was Alexander’s teacher Aristotle that fostered curiosity in philosophy, reasoning skills, and control over Alexander’s desires.  All these influences were used throughout Alexander’s life.  Besides the military strategies used to overcome adversaries, it was because of those influences that Alexander understood why it was important to be seen in a particular way.  For Alexander wanted to be seen as a liberator, and many regions were willing to accept Alexander’s rule because of what was offered, and what would not change.  Alexander did not impose values onto the conquered regions.  Along the way there are descriptions of cultures such as how Greek city-states competed with each other, causing them to develop their own specialty that was recognized as superior.

This is a short book, which means that a lot of details are left out.  Many events were far more complicated than as they appear with the given details.  While reasons behind certain thoughts and decisions would become more understandable with the missing details.  Readers would need additional sources to understand the era of Alexander the Great.