Review of Tribes: We Need You to Lead Us by Seth Godin

Book can be found in:
Genre = Economics, Business
Intriguing Connections = 1) How To and Not To Run a Business, 2) To Cooperate Or To Defect?,
3) Why Do People Think Differently?, 4) The Entrepreneurial Spirit 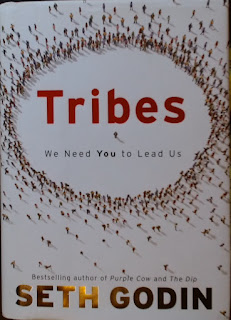 Humans are social beings and want to belong.  Tribes make life better.  Tribes are people connected to a leader and an idea.  Requiring a shared interest, and a method of communication.  Tribes need leadership, and vice versa.  Leaders are meant to be agents of change.  To overcome potential social consequences.  Although many fear failure which paralyzes decisions making, doing nothing accomplishes nothing.  Being wrong is not fatal.  What it takes is a willingness to be wrong.  Anyone can become a leader, and there are many opportunities to be one given the abundance and diversity of tribes.  Even a single individual can change society.  Change challenges the status quo, and leaders are those who rise up to take on that challenge.

There is a lot of leverage to make change happen, embroiled in a marketplace that pleads for the remarkable.  Heretics have become prized for leadership.  Those who challenge the status quo.  Growth requires customers who believe in the leader and support the idea and product.  Customers are looking for products that are different, that are exciting.  For customers, patrons, or tribe members, numbers are less effective than fans.  Fans provide the commitment.  Tribe members who just follow instruction are not going to actively engage, nor will recruit others.

There are tribes which do their best to maintain the status quo and prevent dissent.  Change means that their ways of thinking are being challenged, and they do not like the challenge.  They do not want to be responsible if the different way of doing something leads to negative consequences.

Technology has changed the way leadership needs to operate.  Reducing the cost of change, while providing greater rewards.  The internet has made more people accessible to be part of a tribe, and there are a variety of different tribes.  There are so many different tribes that everyone can be a leader.

This book is an easy read and does a wonderful at expressing the need for leadership, but it is mired in inconsistency and other problems.  Making this book very frustrating, as the reader needs cognitive dissonance to understand the claims.  The basic claim is that everyone can be a leader, but also that the skills needed to do so make them rare.  It is inconsistent to claim that leaders are both common and rare at the same time.

Within the book, the value goes to the single individual who can make change via a tribe.  Although the community and the tribe is how value is derived, the focus is on the individual rather than the tribe.  The individual is important, but so are the people which facilitated the circumstances that that enabled that individual.  Promoting the need of a leader should not come at the expense of the actual tribe.

Change is the panacea of this book.  Disruption is always better.  This is historically not true as change is risky, and the consequences are not as easy to disregard.  The prior modes of production were created via change, but it does not make them immediately inferior when they have become the norm.  There are many ideas and products that are very old, but are still better than the alternatives.  New does not mean better.  Change is needed as it does sometimes make society better.  But change is not always better, and can have dire consequences.