Review of Fight Club Politics: How Partisanship Is Poisoning the U.S. House of Representatives by Juliet Eilperin

Book can be found in:
Genre = Politics
Intriguing Connections = 1) Get To Know This Worlds' People, Regions, Cities, Nations, and Empires (United States of America) 2) To Cooperate Or To Defect?,
3) Why Is Behavior of Individuals Different When They Are in A Group?,
4) Why Conflict Occurs And How To Resolve Them?,
5) How To Have A Conversation? 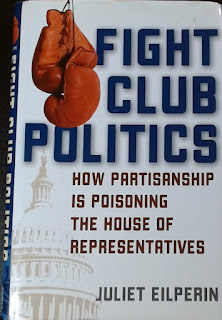 Politicians know that they are most effective when they spend considerable time understanding both party members which lead to legislative coalitions, but now they do not know the opposition.  Both Democrats and Republicans polarized politics via various tactics.  Both sides reinforce and exacerbate the partisan divide.  Tactics that include punishing members who do not completely support the party, while rewarding loyalists.  Whichever side initiated toxic political tactics, the tactics where then promoted by the opposition and utilized more aggressively.  Bipartisan cooperation has become akin to betrayal.  As moderates have become rare, they are having a harder time making their case.  Politicians have become less accountable to the voters, creating a political system that disenfranchises everyone.

House of Representatives is supposed to be closest to the people because of their more frequent elections.  The problem is that by using various tactics, the voters became less valuable.  For many elections, it is the political operatives such as map makers who determine election outcomes, rather than the voters.  That has made politicians less accountable to the public, while more encumbered in party ideology.  By gaming the system, the politicians have created a system where they and other politicians who agree with their sentiments, are continuously elected.  Stereotyping voters based on political affiliation can lead to misunderstanding as the voters tend to be more complicated than the stereotype.  The irony is that their representatives can sometimes fit a stereotype.

A tactic used by both parties is creating unity by punishing those who disagree with their leaders.  Neither side wants bipartisan majority, they seek to have enough votes from their own side.  Negotiation is no longer needed.  Another tactic is the increased use of ‘emergency’ procedures.  Bills are supposed to have at least 48 hours for politicians to scrutinize, but with emergency procedures they are barely given any time at all even for very long bills.

Americans are increasingly politically segregated as they choose to live near like-minded neighbors.  Without personal connections to the opposing political members, they tend to demonize their opponents at the expense of engaging in genuine policy negotiations.   There is less opportunities for the different party members to get to know each other.  Politicians spend less time debating each other, and more time in their region catering to constituents.

A well-written book that makes the social, cultural, and political aspects of U.S. polarization easy to understand.  The author supports centrists and moderates, given that the book is how the system went from having many of them to having little of them.  But, at times, the author shows favor to one side over another party because of the power struggle during the time.  Responsibility for the polarization is given to both.  The topics presented are important, but are explained in an insufficient manner.

Questions to Consider while Reading the Book
•What is the raison d’etre of the book?  For what purpose did the author write the book?
•Why are politicians polarized?
•What tactics do politicians use against their own party?
•What tactics do politicians use against their opposing party?
•Is negotiation needed in politics?
•What happened to the centrists?
•What is the House of Representatives?
•Are voters important for politics?
•Are politicians accountable to the public?
•Why are people politically segregated?
Book Details
Edition ISBN:  9780742551183
Pages to read:   160
Publication:     2006
1st Edition:      2006
Format:           Hardcover
Ratings out of 5:
Readability    5
Content          4
Overall           4
at November 06, 2021