Review of The Assyrian Empire: Explore the Thrilling History of the Assyrians and their Fearful Empire in the Ancient Mesopotamia by History Compacted 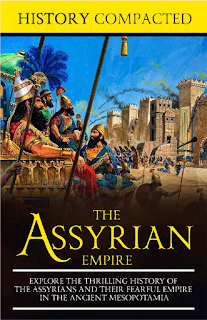 From a vassal city-state to a feared empire, the Assyrian Empire shows the importance of geopolitics.  The Assyrians overpowered their opposition with a well trained professional army and superior warfare technology.  Opponents who resisted were slaughtered.  Opponents who submitted were spared but usually deported.  Conquest for riches was not the only goal, as there were neighboring threats which were ready to strike at vulnerable kingdoms.  The Assyrian brutality would eventually inspire an alliance from other kingdoms to take on the Assyrian threat.  There were many kingdoms which hated the Assyrians but could not take them on alone.  The Assyrian Empire depended on leaders.  Skilled leaders expanded the empire.  Ineffective leaders destabilized the empire.

Riches came from conquests.  The Assyrians were wealthy by dominating the resources of foreign wealthy groups.  Expansion of the empire provided for control of trading routes and access to valuables from other empires.  Deportation was used to access diverse skills and to prevent revolt.  Some people were enslaved for manual labor needed for constructions.  Literate individuals went to work on appropriate intellectual projects.

The empire depended heavily on the leader and with centralized decision making.  Many leaders were highly skilled military tacticians who controlled and expanded the empire.  But ineffective leaders cost the empire its stability.  Royal marriages and peace treaties were also used to expand the empire and gain loyalty.  The king would appoint trusted governors who would have complete authority over provinces allocated to them.  The appointments were based on skill rather than family ties.  A method used to ensure loyalty was to rely on eunuchs, who had no interest in furthering their family line.  Accounts of the king being overthrown occurred due to the kind’s sons, who were not eunuchs.  Sons who were not designated heir but had enough support to make a claim for the throne.  As the empire and the provinces expanded, the governors obtained more local power.  Enough local power to either disregard the king’s commands, or make a claim for their province to become an independent state.

Strict and extensive military training for the purpose of conquest.  A powerful military was needed as there were many nearby groups who would attack vulnerable groups.  Military was meticulously organized.  Used iron weapons which were superior to the bronze of the opposition.  Iron made for stronger and more durable weapons.  The chariot was the prominent tool used for conquest.  Its ability to move quickly facilitated communication between army positions and were able to devastated enemy soldiers due to blades on their wheels.  Land was not a limitation for the army as it was able to move their equipment over water.  Solders who achieved appropriate accomplishments would be enshrined in depictions among the walls of the palace.  The Assyrian army had overreached as they were too spread out to stop uprisings.

One king created a library and obtained many texts from across the empire.  The surviving texts are the prime source for Assyrian history.  The social context of the empire was strict.  Women’s life was harsher as they were legally liable for their own actions and their family members actions.  The punishments for women were also harsher.

The book is fairly short which means a lack of much detail.  The lack of detail may be due to scarce sources.  Some parts do contain enough details.  The writing is smooth and provides a very broad glimpse of the Assyrian Empire.