Review of Cities of Empire: The British Colonies and the Creation of the Urban World by Tristram Hunt

Book can be found in:
Genre = History, Empires
Intriguing Connections = Get To Know This Worlds' People, Regions, Cities, Nations, and Empires (United Kingdom) 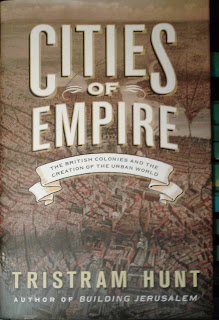 “As the legacy of Empire moves into the realm of Official apologies, law suits and compensation settlements, the space for detached historical judgment has perceptibly narrowed.” – Tristram Hunt, Introduction, Page 8

“While colonization might have begun as a rural pursuit, primarily involved in the extraction of mineral or agricultural wealth from foreign lands, it could not prosper without the development of an urban infrastructure to ship the riches back home.” – Tristram Hunt, Introduction, Page 12

“The British are beginning to appreciate that imperialism was not something “we” did to other people overseas, but a long, complex process that transformed the culture, economy, and identity of the British Isles.” – Tristram Hunt, Introduction, Page 15

This is a book about the British Empire from the perspective of 10 cities of the world.  A colonial past whose morality is in question.  Some see the glory and achievement while dismissing the hardships created.   Others see only the adversities without seeing the social and physical infrastructure that was built.  This is a history showcasing the complexity of the situation rather than just a simple version of ruler and ruled.   With all the contradictions and vicissitudes of political philosophies and morals.  Colonization was a pursuit to extract wealth from foreign lands, but it would not be prosperous with also developing the infrastructure.  A complex process that shaped and reshaped culture and economy.

The book is generally well written, but sometimes has poor flow.  The benefit of this book is to show world regions impacted by the British Empire that the reader can become interested in.  To understand the role of the British Empire in any given city would require supplementary readings.  Therein lies the problem with the book, the missing information.  The author sometimes gets lost in describing the architecture of the city or other factors, and neglects the political, economic, and social factors.  For some cities there is a plethora of those factors, but for others cities the factors are barely present.

A fiercely royal city until the revolution.  The original English inhabitants were Puritans (Protestant) who wanted to separate themselves from corruption and decay, so fled England and Netherlands.  The city was structured as a self-governing commonwealth with a leadership council composed of a network of Puritan merchants and divines.    What mattered was not property, but church membership.  Intolerance to religious disharmony.  As Boston was a trade town, it proved continuously more difficult to maintain Puritan values.  It was trade that made Boston have imperial loyalty rather than coercion.  For all royal loyalty, they wanted political freedoms based on self-governing assembles.

What started the disputes was British ask of the colonies to pay for their own defense.  Resulting in taxes and their repeal.  Many claimed to act legally, but were committing illicit trade.  The problems precipitated in a Tea Act.  Tea shaped what it was to be in the middle-class with all sort of social appliances and applications, but after the taxes, it was seen as a symbol of enslavement and luxury.  The Act would also undermine the illicit trade.

A wild island turned into a well-cultivated market.  This city was financed by sugar plantations.  Sugar was gathered via slave labor which required a slave market.  With the claim that it was the slave market that facilitated the funding of the industrialization process of the British Empire.  Even with the dominance relations, slaves were able to become free and become very wealthy.  The problems with Bridgetown was the monoculture, which reduced the island’s soil nutrients, leading to becoming uncompetitive with alternative colonies.

With the empires political philosophies changing due to the loss of the North American colonies, and increased competition from other colonizers, the British Empire looked to strengthen the internal bonds.  To reconsider how they were going to be as colorizers.  This is where Ireland played a role.  Going from a problem of the empire, to a willing partner of the empire.  Because of Dublin’s proximity, it was not an occupied territory.  Neither was it allowed to be independent.  But dependency on the British caused many religious persecutions and a reduction in the diversity of commerce.

For the occupation of Cape Town, the empire started to focus on commerce.  Commerce was acceptable until the violation of indigenous property lands.  In trying to contrast themselves as better alternatives than other colonizers, the empire started to distance itself from slavery.  Promoting a policy of paternalistic benevolence.

To obtain its wants, the empire made contracts with the Mudgal princes.  But shortly after started to break them.  Land ownership was reformed, giving permanence to the owners, which raised the price of land, but also reduced the willingness to trade.  It was more profitable to be a landlord than a trader.  Initially tolerant of multicultural attitudes, but then turned into an ideological imperial righteousness that contained a racial hierarchy.  Trade from Bengal was competed away by industrialization elsewhere, forcing India to import finished goods.

Hong Kong was meant to be a staging area for a broader entrance into China.  At this point the empire was determined to encourage trade everywhere, even if other did not want it.  In this case, determined to open up China for world trade.  For the British, China was at fault for hoarding productive lands from foreigners.  Although there were orders not to engage in military conflict, the orders were not observed by the officers.  Tensions arose.  Chinese officials tried to maintain order and have their laws followed, but the confrontations worked against the Chinese.

The environmental conditions in Hong Kong created conditions for diseases.  Killing many people.  What kept Hong Kong going was the opium business.  But what made Hong Kong profitable was Chinese labor and trade connections.  The taxes paid rescued Hong Kong from being financially dependent on opium.

From the hygiene and civic problems of Hong Kong came lesson to be used for the planning of Bombay.  Bombay was built to represent the empires monument to modernity.  Using the modern communications and advancing science to plan the urban environment.  Bombay was a multicultural city, but was mired in the dichotomy of ruler ad ruled.  Its core trade was cotton.

Melbourne has a legacy of Aboriginal genocide.  Gold fields marked its prosperity, while the game of cricket market the test for character.  A game that allowed the colonized to take social retribution against the colonizers.

Old Delhi was razed to make New Delhi.  New Delhi was recognized as providing much wealth to the empire.  Its loss would inevitably mean the unsustainability of the empire.  To maintain the grip on New Delhi, the British sought to eliminate civil disobedience by detentions and arbitrary arrests.  The very infrastructure was built with symmetry to reaffirm order on chaos.

This city was mismanaged by political division which prevented potential investments into the city.  Unemployment and other social factors contributed to the downfall of this colony.