Review of The Soulful Science: What Economists Really Do and Why It Matters by Diane Coyle

This review was written by Eugene Kernes
Book can be found in:
Genre = Economics
Intriguing Connections = Learning Economics: Basic to Advanced 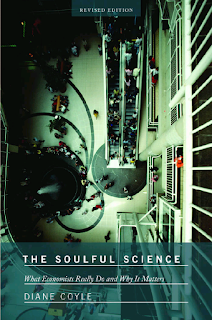 Quotes
“The leading empirical economists are motivated precisely by their engagement with the most profound social challenges; taking the utmost care with statistical evidence is testament to their philosophical and moral engagement and not, as many critics of economics assume, the opposite.” – Diane Coyle, Chapter One: The History Detectives, Page 5
“The logic is that poor countries are caught in a poverty trap.  Incomes are too low for them to save out of their own resources: people have to spend all they earn on food and other necessities.  With no savings, there can be no investment.  With no investment, the economy can’t grow and incomes will stay low.” – Diane Coyle, Chapter Three: How to Make Poverty History, Page 93
“Economists and environmentalists to regard economic growth as actually a bad thing rather than a benefit or a mixed blessing, arguing that growth can diminish economic well-being if environmental impacts are properly accounted for.” – Diane Coyle, Chapter Four: What’s it All About?, Page 125
Quotes with permission from publisher: Princeton University Press

Economists are perceived to have a lot of influence while using inappropriate views about humans, which precipitated in many problems.  The defense to poor economic understanding comes from other economists, who were at the forefront of the criticism.  Much of the narrowness in economics came from limited computational ability, in which models that contained very narrow assumptions were the only models computers were able to run.  As computational power increased, the assumptions were loosened or removed.  Although economics has gone beyond the narrow assumptions, criticism of economics are usually a caricature of what the economic assumptions and ideas have become.  Economists respond to their society by including many factors that were once left out, such as the environment and information asymmetries, are now readily used in economics.

Economists do need to take some responsibility for how the profession is perceived.  Many economists are poor communicators and use language that is easy to misunderstand.  Economists need to better explain their views which jargon laden language does not help with.  Divided ideology from an era ago is still used to define aspects of economics, even though the division has become redundant.  Economics has changed because of many criticisms, while continuously receiving more.  The problem with some criticism is that they are a caricature of economics, which are caused usually by ideological beliefs.

Economists are motivated by the social challenges of the time.  Challenges which they apply empirical evidence.  Math is used to ensure consistency and obtain clarity, not for precision forecasting.  Part of the problem started with economics trying to become more like a physics, creating a mechanistic view of human nature.  Even though many of the sterile assumptions are not used, some prior models are still in use because they work.  But the profession has gone beyond the strict framework of assumptions that proved invalid.  Many of the critics do not reference the more recent research which does not hold the same assumptions.  The problem within economics is that with a lot of computational power came many models, which are not tested properly.  Various assumptions were questioned by economists, such as those behind rational expectations.  That lead to the understanding of bounded rationality in which people satisfice their decisions because they have limited time or information.

The difficulty of finding appropriate economic policies, such as to enable economic growth, comes from the complexity of decisions and policies that are linked to past choices and available resources.  What is known about why economies growth depends on division of labor and specialization.  Productivity of people to produce more with less people.  Depending on how much capital and workers there are, and the productivity of the work.

To invest in equipment required savings which comes from reduced consumption, but it enables the expansion of capital.  But early versions of growth theory had many problems such as misunderstanding the role of relative scarcity of capital and labor.  Theories predicted convergence of growth, but there was no convergence.  Initial versions of growth theory had growth inputs as exogenous factors, but later theories internalized growth and made it endogenous.  A way to make growth endogenous was via creative destruction.  Environmental impact of growth is being taken into account as it is a factor in well-being.

Nations do not need foreign support to growth their economies.  Aid can help, but creates a perverse incentive to not produce wealth.  Aid makes governments dependent on others.  All this theorizing resulted in many practical applications of trying to bring about the end of poverty.

Having lots of resources in a country does not mean that the resources will lead to wealth.  Incomes from resources, like oil, tend to go to the few.  The competition for resource rights can facilitate conflict in unstable countries.  Without the institutions that can cope with increased revenues, it can facilitate corruption.   Stable and rich nations can be harmed by resources as the real exchange rates can change.

Government and markets are not mutually exclusive.  They just represent different ways to organize institutions.  Free market is a misleading abstraction.  Trade has always depended on how societies organize transactions.  Increased trade with fewer protections has benefited the word, but it has also been harmful.  Poor countries do not have the same opportunities to enter the world market, especially when rich countries protect their industries with subsidies.  Competition can be seen as survival of the fittest, where fitness means profitability.  Firms that lose money are closed or are taken over.

For an economics book trying create a better public image of economics with critics and non-economists, it needs to be better written.  Many ideas presented have poor flow, and need better transitions.  The topics are mired in more technical details rather than trying to provide a broad understanding.  Coyle explains that many of the criticisms of economics that are caricatures of economic ideas, but the criticisms do not make an appearance.  It is also mentioned that there are valid and appropriate criticisms, but they are not provided.  Providing why some criticisms are valid while others are caricatures would have enabled clearer understand of the undercurrents.

Questions to Consider while Reading the Book
•What is the raison d’etre of the book?  For what purpose did the author write the book?
•What are the criticisms that economics receives?
•Who criticizes economics?  What kind of criticism to they give?
•What do economists do?
•How can economists change their perception?
•Why are many perceptions of economics a caricature?
•How has economics changed?
•Why is economic growth important?
•What makes growth a complicated topic?
•What makes economies grow?
•What impact does foreign aid have?
•What are information asymmetries?
•Are markets and government mutually exclusive?
Book Details
Edition ISBN:  9781400833689
Pages to read:   283
Publication:     2009
1st Edition:      2007
Format:           eBook
Ratings out of 5:
Readability    3
Content          4
Overall           3