Review of Galapagos at the Crossroads: Pirates, Biologists, Tourists, and Creationists Battle for Darwin's Cradle of Evolution by Carol Ann Bassett

This review was written by Eugene Kernes
Book can be found in:
Genre = Science
Intriguing Connections = 1) Get To Know This Worlds' People, Regions, Cities, Nations, and Empires (Ecuador), 2) The Evolution of Evolution, 3) Earth's Flora and Fauna,
4) How Products Shape and Change the World 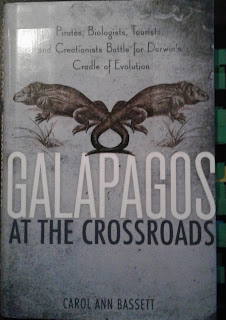 Galapagos Islands used to be uninhabitable to humans, but now more humans live there than the islands can manage.  But it is not only inhabitants that are having trouble living with nature, it is also tourist who flock to see the islands species diversity.  Diversity that heavily influenced the idea of evolution.  Diversity that is threatened by over extraction of fauna and the introduction of various invasive species.  Due to the abundance of nutrient sources, the animals of Galapagos are tamer, a trait called ecological naivete or natural indifference.  But that trait is a problem when their nutrient sources have changed, and others species have been introduced.  The way the Galapagos Islands try to resolve their social, economic, and environmental problems will determine if the natural diversity of the islands can be sustained.

The islands live in an environmentally precarious balance.  Changes in temperature by a few degrees can lead to extinction.  This is an area that is hit by El Nino ad La Nina events, weather patters that heat or cool the waters.  These events drastically change the circumstances of life on the islands.  The vicissitudes benefit some species but hurt others, and then reserve for the alternative weather.

Galapagos Islands were found by Bishop Tomas de Berlanga and quickly became a haven for pirates.  William Dampier was a pirate who wrote about the islands and influenced those who came after.  Haven for pirates turned to haven for whalers.  The islands started to have a stable population in the 1920s as people fled war-torn nations.  More recently, most inhabitants of the islands have not been there for very long so alter their environment to fit to the environment that they were used to.  Because the newcomers do not know about the ecological condition of the islands, they do not know how fragile the situation is, leading them to not following sustainable fishing and others preservation practices.

Tourism does bring in economic benefits but at a cost of environmental problems.  Becoming a guide for the Galapagos Islands is an alternative path than fishing for an income.  As fish populations have declined, many have become guides.  But the requirement for guides was reduced which means that many guides do not know about Galapagos ecology.  Those who fish have had regulations imposed to facilitate better fishing practices, but the fisherman retaliated by committing various piratical acts.  The fragile ecology situation is up against fragile economic situation.  Made worse by the unstable and usually corrupt politicians.

The species diversity of Galapagos Islands influenced the ideas of evolution.  Darwin was not the first evolutionist as there were others before him such as Jean-Baptiste Lamarck.  It would take time for Darwin to consider what he learned at the islands to be valid of proof of natural selection.  All these ideas that were competing with religious beliefs.  But the ideas of Darwin, and learning economic reasoning from Thomas Robert Malthus, lead to the understanding of adaptation in order to survive, to the theory of evolution by natural selection.