Review of The 'Awakening' of China: Western Concepts of China in the Early 20th Century by Edwin Poon

Book can be found in:
Genre = History, Empires
Intriguing Connections = Get To Know This Worlds' People, Regions, Cities, Nations, and Empires (China) 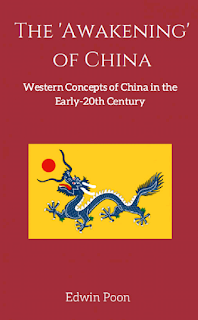 During the early 20th century, China had many comparative weaknesses such as in politics and military.  Nevertheless, there were groups that claimed that China was ‘awakening’, who saw China’s potential.  The message was delivered to foreign groups who had an incentive to propagate such a view.  To draw support to their cause.  The terminology of ‘awakening’ as an antithesis to ‘asleep’.  China had a lot of potential that was seen as inefficiently utilized such as a large military, consumer market, and religious converts.  America seemed to want to help China in order to be China’s ally, without territorial interests.  All this during a time of Western anti-Chinese sentiment, and groups in China who were against foreigners.

A generally good introduction to foreign political relations.  Seeing how different nations saw one another.  As this is a short book, it misses many details.  As in, a lot of history is given a very brief account of.  To understand the issues would require more historic understanding.