Review of The Body: A Guide for Occupants by Bill Bryson

Book can be found in:
Genre = Science, Health Resource 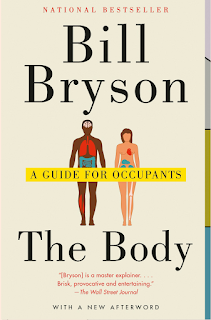 The human body is a marvel of a paradox.  Inanimate matter that has no conscious, creates miracles of life such as animated humans.  Humans are both extremely fragile and extremely resilient.  With so many opportunities and things which can kill a human, humans still survive.  Healthy living may increase the chances of longer life but it does not guarantee an escape from potential dangers.  What we know about what makes the human body is very little in comparison to how much we do not know.  Problem is not just the complexity of life but also a lack of research and funding into the many things that make a human body go.

Although each human share 99% of DNA, people are still different.  From the way each human smells odors and tastes food, to the different immunity systems.  Each person has many different microbes of which many have never been registered.  Bacteria evolve to resist antibiotics, with the antibiotics killing good bacteria as well.  Because of antibiotics, people have less diverse microbes.  Even tears have antimicrobial chemicals which fight pathogens.  Part of the reason why people get fevers is that heat kills off pathogens, but people do not stay hot because it would require too much energy.  Everyone’s immune system is different and responds to a host of factors such as state of mind and toxins.  Although it requires endless work to protect humans from limitless things, the error rate for the immune system is really low.  Sometimes the immune system does attack innocent cells.

Everything we know about the world comes from an organ that has never seem the world.  The brain creates what is seen by interpreting electrical signals.  Seeing is not as important as making sense from what is seen.  Curiously, nonmammalian creatures have more color acuity so live in a visually richer world.

Fears of death have changed from communicable diseases to other maladies.  Lifestyle is the major cause of the problems humans have.  Evolution gave us bodies for a different purpose. As more people live to old age, problems that primarily occur at old age have become more common.  Food has become abundant which causes a arise in weight.  Weight puts more pressure on the bones which cause suffering over time.  Nutrition is the reason why puberty is earlier now than before.  Overfed but nutritionally deficient as many of the things humans eat are not the things humans need.

Bryson tells of what is known about the human body, and all the things that science still can not explain about it.  Along the way the stories and history behind discoveries and the personalities responsible are told.  Besides the complexity of trying to identify what each microbe and hormone does, they may do multiple things in the body.  Medications are not panacea and can have problems when used in combination with other medication.  Doctors do not always have the best interest of the patient as they are influenced by profit making via getting paid by drug companies.

This book is eloquently written but there are a few caveats to this book.  Caveat 1: Each chapter contains many different things about something that makes up a human, which makes it hard for those unfamiliar with the topics.  Caveat 2: Although expressing complexity does a wonderful job at showing what is missing, sometimes Byrson does not discuss some methods or ideas in depth either because they are political as there is no consensus, or because there was not enough space, or maybe the topic is just that complicated.

Questions to Consider while Reading the Book
•What is the raison d’etre of the book?  For what purpose did the author write the book?
•How do the elemental components make humans?
•How did humans evolve into the animals know called humans?
•Why are people different?
•What does skin do for the human body?
•Why do mammals have hair?
•What do microbes do?
•Who do viruses impact?
•How do antibiotics impact people?
•How does the brain perceive the world?
•Why do we have tears?
•How does smell work?
•What is taste?
•How does life style impact health?
•Why is puberty earlier now than before?
•How does the body use energy?
•How do diseases become viable?
•What is cancer?
•Why does the immune system attack innocent cells?
•What does the immune system react do?
•How do people get better from illnesses?
•How much do we know about the human body?
•What is the efficacy of drugs?
•Why not study humans?
•How do doctors treat their patients?
Book Details
Edition ISBN:  9780385539319
Pages to read:   391
Publication:     2020
1st Edition:      2019
Format:           eBook
Ratings out of 5:
Readability    5
Content          5
Overall           5
at February 27, 2021