Review of Guns, Germs and Steel: The Fates of Human Societies by Jared Diamond

This review is written by Eugene Kernes
Book can be found in:
Genre = History
Book Club Event = Book List (09/17/2022)
Intriguing Connections = 1) The Impact of Inequality, 2) How To Allocate Resources?,
3) What Disease Has Wrought: Bacteria, Viruses, And Their Impact On Society,
4) Get To Know This Worlds' People, Regions, Cities, Nations, and Empires  (History of Multiple Regions) 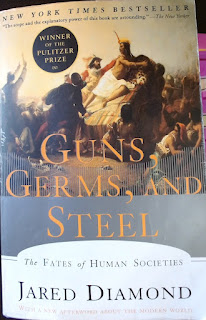 “On the one hand, the proximate explanations are clear: some peoples developed guns, germs, and steel, and other factors conferring political and economic power before other did; and some peoples never developed these power factors at all.” – Jared Diamond, Prologue: Yali's Question, Page 24

“Instead, as we shall see, food production evolved as a by-product of decisions made without awareness of their consequences.  Hence the question that we have to ask is why food production did evolve, why it evolved in some places but not others, why at different times in different places, and why not instead at some earlier or later date.” – Jared Diamond, Chapter 4: To Farm or Not to Farm, Page 105-106

“Political fragmentation has more complex effects than only providing a constructive forum for competition: for instance, competition can be destructive as well as constructive.” – Jared Diamond, 2003 Afterword, Page 431

Different regions have different environments and ecosystems.  Those differences caused differences in the development of nations.  Differences which have created and exacerbated disparities between the nations.  Depending on the environment and ecosystem, peoples were able to form complex societies, or were limited in their social organization.  What different environments and ecosystems do is enable different qualities and quantities of food production and resource utilization.  Culminating in some peoples becoming conquerors, and others unable to resist the conquests.  Even when the different societies are at a seeming deadlock, germs enable a set of people to overcome the other.  Germs developed by close proximity with animals, a major factor within food production.  It is not the race, biological, or intelligence differences among humans that determined the fate of societies.  It was environmental endowment differences.

Although the premise of the book is questioning the proximate causes is how peoples have obtained their superiority.  The concern is the ultimate causes of development.  An ultimate cause is food production, and the factors that facilitated relatively easier production.  Even the way the continents are oriented shaped human societies.  Continents that have more longitudinal geography, make it easier for humans to move because of many similarities such as temperate and biomes, which enables similar food production.  Continents that have more latitude are harder to move within, because environments and ecology vary.

Agriculture provides surplus food, which then facilitated support of specialized skills that do not produce food.  Hunter-gatherer societies did not have surplus food available for non-food producers.  Intensive food production enabled population density, which facilitated economic, social, and political organization.  Even enabled inventions, because inventors tend to experiment with ideas for a long time without public demand.  Alternatively, societies could also learn and adopt the inventions of others.

Initial farmers had harsher lives than hunter-gatherers.  Some societies developed agriculture, and then abandoned it.  Agriculture needed to complete with hunter-gather food production.  What agriculture did is incentivize development of technologies, to make the work easier.  Not all societies chose to keep agriculture when it was developed.

There is a claim that agriculture also incentivized centralized bureaucracies, but history shows that the bureaucracies followed after a considerable lag.  A feature of bureaucracies is writing.  Writing enabled quick dissemination of more information.  Providing more in writing than could be transmitted by mouth.  Writing gives successors access to a huge body of knowledge, and experiences.  Providing more guidance on diverse human behavior.

Animals can be used as beasts of burden that substituted for human energy and physical limitations.  But animals also provided sustenance, and resources to make clothes out of.  Animals were not used just food production, they were also used for transportation, and war.  Humans living near animals developed many diseases due to the germs that animals carried.  Many suffered, but those who survived developed immunity to the germs.  Exposing people to the germs who had no immunity, created a lot of suffering.  Many human conflicts were resolved not by superior strength, but those who had deadlier germs.  Many regions of the Americas were depopulated because of germs from Europeans, making American territory easily accessible to conquerors.

The book can be difficult to read.  Some parts would be best left to an appendix.  Going from the seemingly major factors, to how they became influential is an appropriate method, but that might still leave out many other factors and contributing events to those factors and the outcomes.  Even within the complex arguments, the conclusions might not be appropriate as they can contradict other pieces of information.

There is an emphasis on how easy it was for conquerors to conquer the conquered.  Although there is slight recognition that some events between different peoples were a protracted struggle, the emphasis is on events of easy conquests, which is problematic.  There were many times in which the to be conquered, had won struggles against the would be conquerors, but made choices that then enabled their own demise.

Questions to Consider while Reading the Book
•What is the raison d’etre of the book?  For what purpose did the author write the book?
•What are some limitations of the book?
•How to use historical explanations?
•How does the environment and ecosystem impact the development of peoples?
•How did food production influence development of complex societies?
•Why did some societies choose to farm, others did not?
•What is the use of animals?
•How did germs influence development of nations?
•Why are some plans and animals domesticated while others are not?
•How are disparities between nations created?
•How did the shape of the continents shape societies?
•What happened between the Moriori and the Maori?
•Why was it that the Spanish conquered the Inca, rather than reverse?