Book can be found in:
Genre = Philosophy
Intriguing Connections = Want a Laugh? 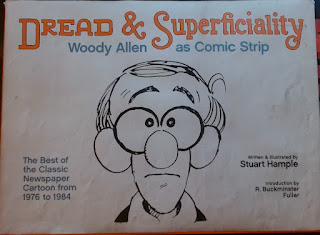 “Woody, the pen-and-ink protagonist, just as in many of his early movies, was angst-ridden flawed, fearful, insecure, inadequate, pessimistic, urban, single, lustful, rejected by women – often after a round of pretentious dialectics.  And he was cowed by mechanical objects, and a touch misanthropic.” – Stuart Hample, “Cartoonist Walks Into a Bar…”, Page 14

“Woody said, “I take that as a compliment.  If a comic persona can reveal the pain, then that is a mark of how dep the humor is.  In the long run, that’s what gives it dimension.  Of course, if the depressing stuff overwhelms the strip, then you have nothing.”” – Stuart Hample, “Cartoonist Walks Into a Bar…”, Page 22

Woody Allen was not always a success.  Early on, many people did not understand Woody’s comedy, Woody’s humor.  The humor was self-deprecating, witty, and intellectual.  Showing a flawed and insecure person, who is very introspective.  The humor was for those who understood the philosophical references.  Woody did not want to underestimate the audience.  Willing to lose part of an audience with esoteric references.  Taking up the advice to keep trying, Woody kept practicing.  Practicing boosted confidence, and created an understanding of how to captivate audiences.

Stuart Hample met Woody Allen before Woody became famous.  As Hample wanted an alternative income, Hample decided to ask Woody about making comic strips about Woody.  But by this time, Woody was famous, and did not need more money.  Woody was resistant, but ended up accepting.  Although most of the work was Hample’s, Hample was excited to get help with the jokes from Woody.

The quality of comedy is varied.  Varied partly because of the individual background of the reader, because those who understand the humor will consider it having more quality.  Some comic strips require understanding of their era.  The humor sometimes needs more time to understand, while others can be quick to read and understand.