Review of Cleopatra: A Life by Stacy Schiff 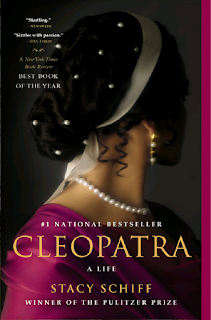 “Not only was her history written by her enemies, but it was her misfortune to have been on everyone’s minds just as Latin poetry came into its own.  She survives literarily in a language hostile to her.  The fictions have only proliferated” – Stacy Schiff, Chapter I: That Egyptian Woman, Page 14

“Caesar felt it incumbent upon him to arbitrate their dispute, as a decade earlier he and Pompey had together lobbied for their father.  A table Egypt was in Rome’s best interest, the more so when there were substantial debts to be paid.” – Stacy Schiff, Chapter II: Dead Men Don’t Bite, Page 20

“Cleopatra’s subjects had no compunction about massing at the palace gates and loudly howling their demands.  Very little was required to set off an explosion.  For two centuries they had freely and wildly deposed, exiled, and assassinated Ptolemies.” – Stacy Schiff, Chapter IIIL Cleopatra Captures The Old Man By Magic, Page 53

During Cleopatra’s era, Egypt was a Roman protectorate.  Their politics and policies were heavily intertwined.  Egypt needed Rome for political stability.  Rome needed Egypt for its food and wealth.  Roman politics were often unstable, and had many political polarizations.  Cleopatra, much like Cleopatra’s predecessors, needed to pick which Roman to support politically.  A wrong choice meant political catastrophe, or worse.  Choosing wisely would mean stability.  Under immense pressure and uncertainty, Cleopatra was able to successfully find a Roman ally.  Initially in the form of Julius Caesar, then in Mark Anthony.  Using wit not only to gain their favor, but bear their children.  Cleopatra is often perceived as a shamelessly seductive woman, but Cleopatra’s power came from understanding social conditions, strategic political maneuvering, skillful direction of an economy, and military command.  Cleopatra was a leader, a Pharaoh, taking up the image of the Egyptian goddess Isis, who brilliantly navigated many perilous situations to secure Egypt’s power.

There are not many reliable sources on and about Cleopatra.  Even Cleopatra’s appearance is shrouded in mystery, as the known version comes from surviving image in coinage.  Many of the claims about Cleopatra are derogatory, because they were written by Cleopatra’s opposition.  Literacy increased during Cleopatra’s time, but the language of that increased literacy was Latin, a language used by many to create fictionalized accounts of Cleopatra.

Sibling marriage was an Egyptian custom.  For the Ptolemies, it was meant to stabilize the family, but had the effect of concentrating wealth and power.  Creating a cycle of succession crisis, with the use of poison and daggers.  Among Macedonian aristocracy, there was ample precedent for murdering siblings.  During Cleopatra’s time, family history of murder was no different, as close family wanted Cleopatra assassinated, and Cleopatra reciprocated in kind.  Cleopatra was formally married to Cleopatra’s brother, with whom Cleopatra was at war with.  The dispute caused a disturbance in Egypt.  The dispute created political instability.  A dispute that was interfered with by Caesar.

Girls, of elite status or no, went to school.  Cleopatra had a really good educational upbringing.  Alexandria had many scholars, and was a recognized center of learning.  Not only did Cleopatra have access to the best tutors, but also access to the library of Alexandria.  For any inquiry, Cleopatra did not need to go far to obtain.

Egypt was an oral culture.  Knowing how to talk was important, which Cleopatra knew how to talk, because Cleopatra received praise for verbal dexterity even from detractors.  Cleopatra was eloquent and charismatic.  Unlike predecessors who learned Greek, but did not learn the language of the people’s they ruled.  Cleopatra learned Egyptian as well.  When Cleopatra became the sovereign, to gain the support of the indigenous population, paid tribute to native gods.  Pharaohs were revered, but also tested.

Cleopatra had a lot of control over the economy.  Had control over production of food and taxes.  Daily measurements and comparative data were used to make decisions.  Egypt’s harvests provided food in abundance, and from them the Pharaohs power was derived.  Egyptian officials distributed seed, which was required to be returned during harvesttime.

Unlike Rome, Egypt had a dense bureaucracy.  A government which had controls in every industry.  A bureaucracy that was intent on making sure the monarch taxed the people, while the people filled the coffers.

Fiscal policy was based on a hierarchy of people which created a lot of opportunities to abuse the system.  Many were willing to arbitrate conflict to enrich themselves.  Cleopatra had to intervene regularly between the people and the officials.  Even the highest held offices abused their positions.

Under Cleopatra’s guidance, many aspects of the economy stabilized and prospered.  Villages, art, science, and culture flourished.  Egypt was primarily administered by Greeks, while primarily worked by Egyptians.  Caused a lot of resentment.

Contracts in Greek and Egypt were subject to their respective laws.  Egyptian women had more rights than Greek or Roman counterparts.  Roman women needed to be inconspicuous, and had no political or legal rights.  While in Rome, Cleopatra made a spectacle, such as issuing dinner invitations.

For Cleopatra and predecessors, Rome was a protector of Egyptian monarchs.  Without Rome’s disruptive power, Cleopatra and predecessors would not have had their thrones.  Rome had many internal feuds that impacted Egypt.  Cleopatra and predecessors needed to select which side of the feud to take.  The crown hinged on the choice that was made.  Choosing wrong meant losing power behind the throne.  As for the Egyptians, they did not appreciate Rome’s interference.  Not only did the Alexandrians not want to become Roman subjects, but previously installed monarchs by Rome had asked for heavy taxes without justifiable reasons.

Between the feud of Caesar and Pompey the Great, Cleopatra and Cleopatra’s father favored Pompey the Great.  Within this dispute, Pompey was on the losing end.  Cleopatra bet on Pompey, and lost.  Pompey then wanted entry to Egypt.  Admitting entry or denying entry, would create political tension.  Before a reply, Pompey was stabbed to death by Ptolemy’s advisors who had wanted to earn Caesar’s favor.  Caesar went to Egypt, chasing Pompey.  Caesar did not favor the tribute that Ptolemy’s advisors gave.

Rioting in Alexandria was common, and had no problem massing at the palace gates.  There is a history of the people assassinating the rulers, and making demands of them.  Alexandrians thought that either Caesar would interfere, or seek conquest.  Riots greeted Caesar.  Egyptian autonomy was at stake.  What the Egyptians had was cleverness and resources.

As Caesar was in Alexandria, Caesar decided to arbitrate the royal dispute.  An attempt to stabilize Egypt, which would be in Rome’s interest, especially with debts to be repaid.  When Caesar made the summons of the Egyptian King and Queen, Cleopatra’s entry was being barred.  Cleopatra had an army for the conflict with Cleopatra’s husband, but to get into the city, Cleopatra used wit and stealth.  Got into talks before Cleopatra’s husband.  With Cleopatra’s influence, Caesar began to favor Cleopatra.

Cleopatra must have been very persuasive with Caesar because Cleopatra had nothing to offer.  Caesar would have been within Caesar’s rights to annex Egypt, and murder Cleopatra for a truce with Egypt.  The reason for wanting a stable Egypt, is because Egypt produced a lot of surplus food.  Enough to feed all of Rome, or starve the city.  A stable Egypt was strategic for Caesar and Cleopatra.  A Roman would have caused instability, and therefor Rome would not have a secure food supply.  Caesar needed a reliable non-Roman to rule Egypt.  Caesar not only trusted Cleopatra, but had confidence in Cleopatra’s ability to rule.  Caesar wanted to reconcile the royal dispute, with Cleopatra ruling Egypt as partner with Rome.  This was contrary to Ptolemy advisers’ expectations, as they thought they had more control of the situation.

The Alexandrians were revolting, and were being marshaled by Cleopatra’s husband who did not favor Caesar’s favorable view of Cleopatra.  With Caesar and Cleopatra barricaded, what they heard are the claims that Rome liked to interfere with who ruled, with the policies enacted therefor being unfavorable to the Egyptians.  Cleopatra and Caesar were stuck in close proximity for 6 months.  Within that time, Cleopatra emerged pregnant.

Motherhood strengthened Cleopatra’s political agenda, securing a future.  The child would give Cleopatra an heir, and strength ties with Rome.  The child was Caesar’s.  From the Roman perspective, the event was an embarrassment.  From the Egyptians, Caesar was neither a Ptolemy nor royal.  What the child, Caesarion, did was allow Cleopatra to rule without intervention.  Making Cleopatra’s husband irrelevant.  With the child, Cleopatra had control of imagery and government.

Rome’s diplomacy between the power brokers relied on marriage.  Alliances lasting until the individual who bound the people died.  The relationship between Caesar and Cleopatra was unusual in many respects, which includes that Cleopatra entered into the relationship willingly.  An independence of mind and enterprising spirit which unsettled those who wrote about Cleopatra.

Caesar’s death was a significant political setback to Cleopatra.  Losing Cleopatra’s Roman champion made Cleopatra’s situations insecure.  Cleopatra was blamed for many of Caesar’s decisions to obtain more power, and change Roman society to be more like Egyptian.  The death of Caesar caused a hunt for the murderers.  With empty coffers, the enemies of Rome were targeted for assassination so that their wealth could be appropriated.

The battle for power in Rome involved Mark Anthony and Octavian.  Cleopatra was able to get an alliance with Mark Anthony, with whom Cleopatra had twins.  For a time, Cleopatra, Anthony, and Octavian had a political triumvirate, but Anthony’s and Octavian’s personality differences and feuds escalated, causing infighting.

While they were still politically united, Octavian and Anthony took Roman legions to conquer regions.  Anthony wanted Parthia, which could not be had without Cleopatra’s monetary support.  With this support, power had shifted.  But Octavian was gaining more favor and influence than Anthony.  Eventually causing Anthony and Cleopatra to commit suicide.  Then reshaped history to fit Octavian’s version.

There were many authors during and after Cleopatra who used derogatory claims against Cleopatra.  The way they portrayed Cleopatra was not historically accurate, and reflected the social context that the authors lived with.  Schiff does more than correct the historical record of the derogatory claims, as Schiff also reproaches the individuals who made the derogatory claims.  As if the individuals would have made the same claims under a different social context.  The many and repetitive reproaches, take away from reading the history.