Review of The Rise of Persia and the First Greco-Persian Wars: The Expansion of the Achaemenid Empire and the Battle of Marathon by Manousos E. Kambouris 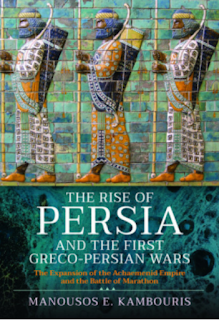 Sources about the Persian Empire are scarce and often biased in favor of some peoples over others, creating a distorted account of events.  The author attempts to corroborate sources, and rectify the errors, to make an account of the events and battles as they actually happened.  The focus of the book is on the battles and wars.  The weapons and tools that were available.  The tactics and strategies employed.  Naval and land capabilities.

Greek city-states and the Persian Empire had some similarities, such as the need for resources outside those that were available in their regions.  The way they obtained those resources was different.  While the Greek city-states created colonies, the Persian Empire conquered regions. The decentralized system of the Greek city-states created friction, as their differences did not mix well.  The centralized system of the Persian Empire was able to make bureaucracy more systematic, such as with taxation, but created a problem with rebellions, as people did not want to give up their freedoms.  Showing the cultural attitudes toward others, and the importance of geopolitics, as the people who could offer valuable services were favored, while others were under pressure.