Review of The Gifts of Africa: How a Continent and Its People Changed the World by Jeff Pearce

Book can be found in:
Genre = History, Empires
Intriguing Connections = 1) Get To Know This Worlds' People, Regions, Cities, Nations, and Empires (History of Multiple African Nations), 2) The Persecuted and The Persecutors 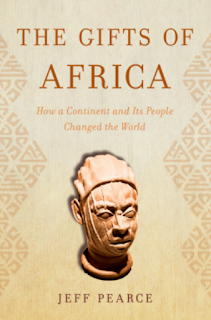 Africa is a diverse place that has a long history of political maneuverings, cultural traditions, philosophy, art, science, medicine, and economics.  Africa was where the wealth and power was in the ancient world.  This intellectual history is usually not recognized because it does not seem very African.  Only seems that way after many of the artifacts were stolen or destroyed, leaving no trace of the rich history.  Part of the reason is because Africa has a deep oral tradition, which informs decisions and keeps behavior accountable to future generations, but is in question because of the fragility of memory.  This book reorients African history to be about Africa, rather than as part of a description of the West.  Africa had contact with various cultures.  They even had a code of chivalry.  Even when considered mystical figures, rulers knew their limits.  This is a book of how various individuals from different backgrounds have influenced the world through their work.  From the wealth of Egypt to the resistance and activism of the early 21st century.

The book is sometimes difficult to read.  Although the author is correcting a bias, the author also has a bias.  What the bias indicates is a need to figure out how to talk about Africa without dismissing African achievements and hardships, while seeing how Africa influences and was influenced by the world.

Questions to Consider while Reading the Book
•What is the raison d’etre of the book?  For what purpose did the author write the book?
•What are some limitations of the book?
•How is Africa usually described?
•How did Africa influence other cultures?
•How was Africa influenced by other cultures?
•Who did Africa have contact with?
•What intellectual pursuits were there in Africa?
•What kind of wealth was in Africa?
•Why was Africa being dismissed of its history?
•What political organization systems were in Africa?
•Why was there a slavery institution?
•How did Africa interact with the West?
•Who are the activists and for what causes did they have?
•What are some African terms?
Book Details
My edition was provided by NetGalley
Edition ISBN:  9781633887701
Pages to read:   464
Publication:     2022
1st Edition:      2022
Format:           eBook
Ratings out of 5:
Readability    3
Content          4
Overall           4
at February 03, 2022