Review of Ancient China: Chinese Civilization From Its Origins To The Tang Dynasty by Maurizio Scarpari 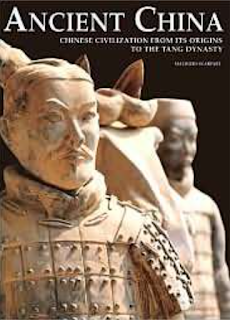 This is a museum in a book.  The cultural building blocks of China.  Showcasing not just the various aspects of ancient Chinese culture, but the very artifacts from the time period.  Chinese considered their region as the center of the world, the Middle Kingdom.  Usually organized by a system of kingship whose ambition was to conquer and unify everything under Heaven.  Dynastic rule was based on divine authority.  Depending on the behavior and conduct of the rulers, they might lose or gain the favor of Heaven.  A Mandate from Heaven that could be used to legitimately overthrow a dynasty.  Many of the glories of the dynasties, came about because of the efforts of prior dynasties.  Honor between adversaries was to be upheld during battle and after.  Mercy was not uncommon.  Although wanting to influence other peoples, China itself was heavily influenced by other cultures and ideas, such as with Buddhism.

Earlier rule was based on Shaman-priests, a class dominating politics from a magical-religious influence.  Technology during this era was directed at ritual items, rather than improving everyone’s lives.  Divination gradually lost its central role in worship, changing where resources were directed to.  Political organization shifted bureaucracy gradually from family bonds, to merit.  Bringing further coordination from local governments by a system that facilitated extensive central control.

Unified by 221 B.C.E. under the Qin dynasty.  Even with various political vicissitudes, it was an empire that persisted though many centuries, until 1911 C.E.  Many works such as philosophy, literary, and historic were burned by the Qin.  The works held traditions, which were obstacles to implementation of new plans.  Annals of Qin, and scientific treaties were excluded from the destruction.  The Qin dynasty did not survive past its founder, as a power struggle tore the government apart.

But it is not only purposeful destruction that contributed to the scarcity of artifacts, it was also time.  Little has survived the ravages of time, as most architecture were constructed using perishable materials.

China has a history of extreme inequality.  During certain times, they allowed enslaving peasants.  With peasants generally losing more and more land, and therefor having to work for large landowners.  Elites had most of the resources, while the rest lived in poverty.  Luxury products were produced with the resources that the elite had.

Chinese had various mystic and philosophical understandings that coordinated behavior.  Confucianism focused on family ties.  Learning about past values, culture, and improvement of oneself were tools for moral progress and how harmony is generated from social conscience.  Daoist focused on the individual rather than society.  Aspiring to a simple existence devoid of ambition.  Within these mystical ways, the individual would be capable of liberation from the physical world.

China wanted to assimilate people outside their lands, but China itself was influenced by foreigners.  Buddhism was quickly integrated into Chinese civilization.  A massive effort between Chinese and Indian monks to translate the Sanskrit texts.

The book covers a very long period of time, with many changing aspects.  As such, the book is limited in creating an in depth understanding of any given era.  What is also limited are the interconnections between ideas and topics.  The book works well as an introduction to Ancient Chinese culture, but more research will be needed to understand how the various cultural aspects fit together, and the reasons behind many of the changes.

Claims are often made without much detail or explanation making it difficult to accept.  Some claims might have been passed down, while the details have been destroyed with time.  A claim made without much explanation includes the continuity of the empire, given the various dynastic breakups, and China itself being conquered.  What is missing, due to lack of space, are the various interpretations of the ideas.

Questions to Consider while Reading the Book
•What is the raison d’etre of the book?  For what purpose did the author write the book?
•What are some limitations of the book?
•What artifacts do you find interesting?
•How was ancient China politically organized?  How has the organization changed?
•When was China unified?
•What was the impact of the Qin?
•What is the Mandate of Heaven?
•What are ancient Chinese philosophies and religions?
•How was ancient China influenced by foreigners?
•What threats did ancient China face?
•What survived the ravages of time?  What did not survive?
•How was social life during ancient China?
Book Details
Edition ISBN:  9780760783795
Pages to read:   275
Publication:     2006
1st Edition:      2000
Format:           Hardcover
Ratings out of 5:
Readability    4
Content          4
Overall           4
at February 01, 2022