Book can be found in:
Genre = Economics, History
Intriguing Connections = Get To Know This Worlds' People, Regions, Cities, Nations, and Empires  (History of Multiple Regions) 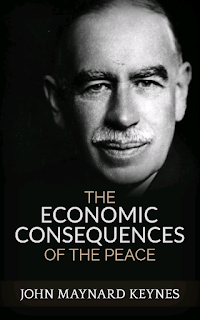 Short Description
Excerpts
“The power to become habituated to his surroundings is a marked characteristic of mankind.  Very few of us realize with conviction the intensely unusual, unstable, temporary nature of the economic organization by which Western Europe has lived for the last half century.” – John Maynard Keynes, Introductory, Page 5
“The immense accumulation of fixed capital which, to the great benefit of mankind, were built up during the half century before the war.” – John Maynard Keynes, Europe before the war, Page 14
“To limit the population of Germany and weaken her economic system, is clothed, for the President’s sake, in the august language of freedom and international equality.” – John Maynard Keynes, The Conference, Page 35
Elaborate Description

After the end of the First World War, the question was what to do with the defeated.  The Paris Peace Conference was meant to determine the solution.  John Maynard Keynes was an official representative, but had to resign from the position due to disapproval of the solutions, which were not going to be modified.  The treaty was set to impair the fragile organization and economic system already disrupted by the war.  Those who won the war, were abusing their power which would inevitably invite their destruction.  The actions of the winners were made to serve noble purposes and have moral support while making a caricature of the defeated who would have their population limited and economy weakened.  Reparation debt was to be so high as to make the numbers useless.  Resources extracted from would have prevented the defeated from using any, while limiting production in the winners’ nations.

Economic systems are very complicated and temporary, but people have a tendency to become habituated to their lifestyles.  The lifestyle of the Europe before the war was fairly pleasant, in which people could purchase what they needed to be delivered to their home, and travel to foreign places with ease.  Income inequality facilitated those who did not consume all their income, to invest it.  Creating massive improvement that helped everyone.  The instabilities before the war included excess population, inequality, and limited agriculture.

Keynes uses psychology, history, and economics to make the case that the treaty had many flaws.  There is account of the proceeding and descriptions of the representatives.

Generally poorly written, but there are some sections from which insight could be gained.  Prescient for its time, and not that technical.  Containing a diverse set of insights about the treaty background and internal affairs, but needs to be edited.