Review of The Up Side of Down: Why Failing Well Is the Key to Success by Megan McArdle

Book can be found in:
Genre = Economics, Behavioral
Intriguing Connections = 1) How to Teach? How to Learn?, 2) Ways To Help Oneself and Life Lessons 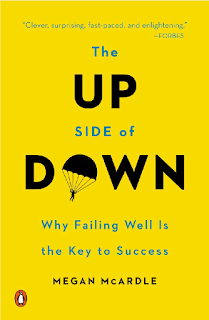 Failure can be a wonderful learning mechanism.  It informs what decisions are wrong, and how to reconsider them.  Failure is difficult to accept as a positive outcome, especially when failure comes without a lesson.  Society tries to create systems to prevent failing because failing feels bad, but that also prevents learning.  Failing can be due to good decision making, such as taking a risk.  Risks such as tying things differently.  It’s not possible to avoid failure when trying to succeed.  Failure is part of the process but it is not about failing for its own sake, as what matters is how to fail.  Failing early and often, rather than failing in a catastrophe.  Failure can be embraced, and seen as a learning opportunity.

Failures are not accidents.  Accidents are coincidences which could not have been anticipated.  There was no error in judgment, as no decision or action should have been done differently, even if they were available.  Mistakes are errors in judgment but when no major problems occur in the aftermath.  Errors that can inform of what could have become a terrible situation, and potential preventative measures to be taken.  Safety nets turn failure into mistakes.  Failure is relative to alternative outcomes that could have prevented the problematic outcome.  Failure is when the safety nets do not work.  Complex systems have a variety of interactions that can be unpredictable and unexpected which will cause failure that are not the fault of a decision, person, or procedure.

There is a lot of valuable information that can be gained from failure, which should not be dismissed.  Failing is constructive when it comes from taking appropriate risk, not risking too much, and not for its own sake.  Manageable risks enable learning.  It is impossible to know if a decision is good until it is put to the test, as in put to the trials of reality.  But hindsight makes it easy to believe that predictions can come about from reason.  People want to believe predictions are possible because they are a cure for failing, but no matter how informed or smart an individual is, predictions in many cases are not likely.  Experts appear to be better predictors because successes are remembered, while mistakes are not.  The many successful scientific and technological ideas that work now, came about through various iterations of terrible ideas.

Failing well means learning from mistakes.  It inspires change in what is being done.  What is needed is to understand the mistakes that lead to failure.  Some mistakes need punishment.  Other mistakes were random coincidence from which no decision could have been known beforehand to prevent the outcome.  Failure can happen spontaneously, not because of malicious intent.  Sometimes there is someone to blame.  Other times blaming others prevents learning about what happened, such as random coincidence.  People have a hyperactive agency detection system which them to see intention rather than coincidence. People think they have more control over their lives than they actually do, its called the illusion of control.

Success teaches as well, but can also teach bad lessons.  If prior success was based on natural talent, it can teach the qualities are based on intrinsic value, rather than the development of skills.  Rather than telling people how good/bad they are, its best to emphasize the process of the learned or developed skills.  Emphasizing the effort rather than intellect, talent, or looks.  That skills and ability come about through struggle, rather than from a lack of trying.

Parents and schools have been trying to take failure out of the learning process.  Without failure, there is no need to develop the emotional attitude to overcome the fear of failure.  Students usually see the best works produced, not the various terrible earlier drafts.  As the struggle is not seen, the impression created is that being good at somethings means not creating bad stuff.  There is a problem with teaching when no matter the performance, everyone succeeds.  It prevents learning from failure.  Being overly protectives means preventing others from learning.

What makes homo sapiens successful is their ability to collaborate on massive projects.  Successful groups talk and communicate their values.  Communication brings about a culture which can either enhance prosperity, or inhibit it.  No matter the intellect of any given individual, it is through collaboration can they be succeed.

Different cultural rules develop based on the risk of failure.  Hunting is a risky endeavor in which skill was not the only factor to be able to eat, as what was needed was luck that the animal would show up.  Sharing reduced the risk within the variance of food supply.  Cultures that had a stable food supply did not need to share.  Foragers and farmers have different values because their risks are different.  Foragers needed an immediate social insurance so developed values of reciprocity and equality.  Farmers need to ensure future productivity so developed values of proportionality and justice.  The way those values come about in 21st century politics is by seeing income as hard work or luck.  Seeing income as earned through working hard, politically would mean favoring lower taxes and reduced safety net. Seeing income as luck, politically would mean favoring redistribution and making sure everyone pays their fair share in taxes.

Markets are not just a set of formal rules, as they are also composed of informal rules.  Those informal rules work if they are aligned with the risk environment.  Both sets of rules determine what the appropriate actions are.  Appropriate actions are easy when they are rewarded, while difficult when they are not.  Swift and consistent punishing allows individuals to known what the inappropriate behavior are.  Sporadic punishments can reinforce inappropriate behavior.  Lack of punishment teaches that violations carry close to no risk.   Forgiveness is needed to move forward.  But too much forgiveness invites further transgression.

It is wrong to assume that someone can take all the risk out of the system.  The closer the assumption is to a riskless system, the worse the outcome because people will not be prepared for failure.  Problem with safety nets is forgetting that they are there.  That mistakes have been made, but are not identified.  Mistakes are usually identified when there is a failure.

People sometimes pretend that everything is fine even when everything is not fine is called the normalcy bias.  People have a strong inclination to behave in their normal manners when things are clearly not normal.  Taking a risk can lead to failure or success, but it is a problem when the failures proceed with escalating commitments.

Failures can be prevented by spotting the mistakes and correcting them.  But it is hard to change decision making.  Change is difficult when historically there have been a lot of success using the same decisions.  All this makes new policies not perform well under old rules based on well-established mind-sets.  Difficult to change when the brain is invested in commitments which makes it hard to let go.  Rather than try to refute ideas, the individual will recruit evidence to prove an idea correct.  Confirmation bias causes people to support wrong ideas, but it also creates a person willing to contradict the idea.  Diversity of views facilitates alternative views that prevent being captured by a particular idea.

Although the central theme of the book is failing, all the lessons appear like pieces of a puzzle that do not come well together.  A concluding chapter that brings together all the takeaways, and how they fit together, would have enhanced understanding.  What is also problematic are the examples.  Although important and do highlight key aspects of failing, they seem to have pieces missing.  Hard to generalize the examples provided.  There also seems to be inconsistency in some of the claims made such as the negative aspect of having to constantly give feedback at a work place, even though feedback is part of the learning mechanism as well.  A part of the book deals with the importance of communication, well, feedback is communication that helps establish appropriate behavior over time to build the appropriate cultures.

Questions to Consider while Reading the Book
•What is the raison d’etre of the book?  For what purpose did the author write the book?
•What does it mean to fail?
•How to fail?
•How to identify mistakes?
•What can failure teach?
•What does it mean to take risks?
•Who or what is to blame for the failure?
•How can schools teach failure?
•How does success come about?
•What are safety nets?  What impact do the safety nets have?
•Is it possible to build a fail-safe world?
•How does science make progress?
•What is the difference between having a growth mindset and a fixed mindset?
•What can success teach?
•How does culture shape failure?
•How should punishment be applied?
•How should forgiveness be applied?
•What are the limits to experimentations?
•Why did the kindergartners build taller architecture than the engineers?
•What is the technocratic fallacy?
•Does socioeconomic status matter when failing?
•How do societies deal with a variable food supply?
•What do foragers value?  What do farmers value?  Why does each value what they value?  Why the difference?
•What happened between the car companies and the unions in the 1970?
•How do employee and employer relationships differ between countries?
•What is the inattentional blindness?
•How does playing games help?
Book Details
Edition ISBN:  9780698151499
Pages to read:   246
Publication:     2014
1st Edition:      2014
Format:           eBook
Ratings out of 5:
Readability    4
Content          5
Overall           4
at July 12, 2021