Book can be found in:
Genre = Economics, Finance
Intriguing Connections = 1) Learning Economics: Basic to Advanced,
2) Monetary Policy, A Leaver of the Economy 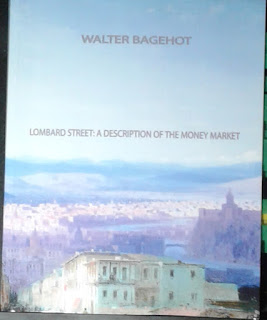 Short Description
Quotes
“It is sometimes said that any foreign country can borrow in Lombard Street at a price: some countries can borrow much cheaper than others; but all, it is said, can have some money if they choose to pay enough for it” – Walter Bagehot, Chapter I. Introductory, Page 3
“Credit is a power which may grow, but cannot be constructed.  Those who live under a great and firm system of credit much consider that if they break up that one they will never see another, for it will take years upon years to make a successor of it.” – Walter Bagehot, Chapter II. A General View of Lombard Street, Page 38
“There is a partnership in industries.  No single large industry can be depressed without injury to other industries; still less can any great group of industries.  Each industry when prosperous buys and consumers the produce probably of most (certainly of very many) other industries.” – Walter Bagehot, Chapter I. Introductory, Page 38

This book is a reaction to the amount of funds, the amount of debt that has become available at Lombard Street.  So much money was available to lend and so much was borrowed that it seemed that everyone could get money if they were willing to pay enough for it.  Banks acting as intermediaries between those who have money and those that need money.  Lombard Street being a central location of the 19th century that comprised many banking institutions.  With so much debt, and the economy being very interdependent, a need a rose for a reserve fund, what is now called a central bank.  With a goal of reducing panic and crisis, but comes at a price of changing incentives and containing functions that can exacerbate the crisis.

A basic foundational fact about banking is that the institutions are depend on borrowed money.  Credit means confidence and trust given.  Banking acts as an intermediary between firms that are on the rise in which money can be easily employed, and firms which are stationary or declining that have more money that than can be used.  Borrowed money enhances the ability of the firm to produce.  From providing funds to start ventures, and also to lowering prices below those who are relying on just on their own money.

With so much borrowed money comes the risk that the banking and industrial system would be in danger if enough people demanded money.  Each industry is connected to others by the purchases they make.  Should an industry have economic problems, the problems will reverberate to other industries.  Prudent banks will save reserve money during normal times, to use in exigent times.  Credit is a system that cannot easily be brought up.  Breaking the system of credit will destabilize the economic system.  There will be a long wait for a successor system.

Due to the danger of an unexpected increase in demand for money from banks, a reserve fund is to lend that money needed to be established.  Setting up a reserve found has many perils such requiring state aid, reduces incentive for banks to save money, depended on a single individual or group for decision making rather than the average wisdom and folly of competitors, and can be pressured by board of directors for high dividends which require a small reserve.  There are many unexpected events and accidents that can cause a panic to the credit system, but a central bank needs to be prepared for all of them by keeping a large cash reserve.

During a time of crisis, the central bank’s goal is to reduce the alarm, and not do more to exacerbate the alarm.  To do this, the central bank needs to lend vigorously.  A high interest rate for the loans prevents those who do not need the money from obtaining more money, and acts as a fine on unreasonable timidity.  Loans based on good securities should all be made.  To refuse a loan based on good securities would be cause other loans from being fulfilled thereby exacerbate the panic.  What qualifies as good securities is the same qualifications during normal times, easily convertible assets to solvent merchants.  Simple rules tend to be uniform and can cause more problems than they fix because the dangers faced are complex and many.

This book was written when the Bank of England was taking on the responsibilities of central banking.  The lessons derived from this book are present in the 21st century, but there are also many adjustments.  The writing of the book is not always smooth and has poor transitions, and contains many antiquated terminologies.  Some of the arguments are contradictory and are not fully explained.