Review of The Crusades: A History from Beginning to End by Henry Freeman

This review is written by Eugene Kernes
Book can be found in:
Genre = History
Intriguing Connections = 1) Get To Know This Worlds' People, Regions, Cities, Nations, and Empires (History of Multiple Middle East Nations), 2) War 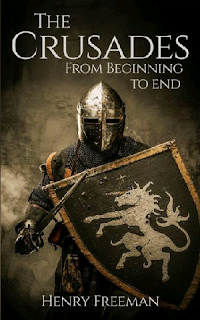 As Islamic armies were threat to the Western world, Pope Urban II initiated the first Crusade.  A Crusade that was meant to defend besieged Christian peoples in the East.  The Kingdom of Jerusalem was a collection of captured cities, creating a Crusader Kingdom.  Later Crusades were launched to retake lost lands in previous Crusades.  This book showcases a few events from a majority of the Crusades, which include the rivalry and respect between Richard the Lionheart and Saladin.  In another Crusade, in a twist of events, the Crusaders ended up sacking the Byzantines which they were meant to protect.  A key lesson in this book is that negotiating diplomatically had better results than warfare.

There is a huge problem with this book which is what the book leaves out.  Not because it is a short book which lacks events and proofs, but the perception that Freeman continues to instill in the reader.  A perception that the Islamic Empires were ruthless, cruel, and dishonorable, without any redeeming qualities.  Without mentioning anything about cruelties and dishonorable behaviors of the Christian world.  In an effort to provide a more nuanced view, unlike the Christian world of persecution, the Islamic world facilitated tolerance between different religions and made many intellectual breakthroughs which help precipitate the enlightenment in the West.  What is worse is that the antagonistic view held by the author throughout the book, involves relations in the early 21st century.  There were a few times that the author claimed that historians could not deny a fact, but historians would disagree and provide a way more nuanced claim.

•What is the raison d’etre of the book?  For what purpose did the author write the book?
•What was the reasoning behind the original Crusade? Following Crusades?
•Who were the Crusaders?
•What is the Kingdom of Jerusalem?
•What was the relationship between Richard the Lionheart and Saladin?
•Why did the Crusaders sack Byzantine?
•Did negotiations work?
•What were the Islamic leaders and government like?
•What were the Christian leaders and government like?
•What do you think of the author’s view on the Islamic communities?
Book Details
Edition ISBN:  2940152854244
Pages to read:   32
Publication:     2016
1st Edition:      2016
Format:            eBook
Ratings out of 5:
Readability    5
Content          2
Overall           2
at March 07, 2021