This review was written by Eugene Kernes
Book can be found in:
Genre = Economics
Intriguing Connections = 1) Learning Economics: Basic to Advanced,
2) Capitalism, Socialism, their Alternatives and Critiques,
3) Globalization and International Trade: A Known Problem? 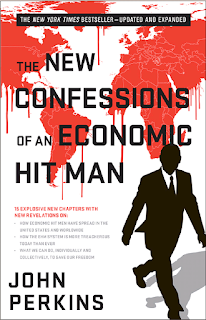 Short Description
Quotes
“Fear and debt drive this system.  We are hammered with messages that terrify us into believing that we must pay any price, assume any debt, to stop the enemies who, we are told, lurk at our doorsteps.” – John Perkins, Introduction: The New Confessions, Page 19
“A corporate empire supported and driven by the US government” – John Perkins, Chapter 3: “In for Life”, Page 45
“The corporations that hired them, although paid by government agencies and their multinational banking counterparts (with taxpayer money), would be insulated from congressional oversight and public scrutiny, shielded by a growing body of legal initiatives, including trademark, international trade, and Freedom of Information Laws.” – John Perkins, Chapter 3: “In for Life”, Page 49
Quotes with permission from publisher
Elaborate Description

Military occupations and colonializations have become too risky in geopolitics.  The solution was to use the private sector to reach the same goals for global power.  US intelligence agencies would scout prospect Economic Hit Men (EHMs) who would be hired by international corporations.  The EHMs would make nations financially depended on the US, as either the leaders would accept the loans or be removed by the US government.  US corporations would gain the construction money, so no loan money would ever leave the US.  Any scandal would be portrayed as corporate greed as they were paid by the private sector.  The corporations would be paid by government counterparts with taxpayer money, while insulated from congressional oversight and public scrutiny.  A system that allows the use of US power and influence without accountability.  US empire composed of corporate power, a corporatocracy.

The job of Economic Hit Men (EHMs) is to justify large loans whose money will be used for massive corporate engineering and construction projects.  Then work to bankrupt the countries who will then be beholden to creditors and will be forced to provide concessions.  Propositioned leaders have a choice whether to accept US loans to indebt their countries, or have the CIA remove them.   When the country cannot repay the loans, the country will be forced to give up resources such as oil and provide benefits to the creditors.  Collusion of corporations, banks, and governments to coerce acceptance of debts which benefit the creditors at the expense of the debtors.  A system creating long-term financial dependence which fosters political loyalty.

Fallacious and bias economic models are used to prove the debts will be useful.  The models legitimize the debts.  The models show that the whole country will benefit for a long time.  In reality, only few in the country will benefit while resources are taken away from those who need it.  In the debtor country, the financial burden will be on those most vulnerable, the poorest citizens as their access to resources and institutions will be limited to cover financial servicing fees.  Few people in the debtor country will benefit, but the country as a whole will show an increase in economic production (GDP, formerly GNP).  Economic progress in which the rich get richer while poor grow poorer.

Many people taking part of this system had rationalized their activities by claiming that they were protecting the US and fighting communism and terrorism.  Perkins was part of this system and although had doubts, participated in enabling increased US power in many countries.  This book is an attempt to make amends, hence his confessions.

Those who suffered under the imposed requirements by the US had been left with no other option but to seek help from US enemies, which ended up giving credence to US claims and punishments.  The world is outraged by US circumvention of international law, but the people in the US are not aware of crimes committed by their government or what the world thinks of it.  The press provides scant views on the issues due to pressure from the government.  The system pretends to reduce threats to the US and increase US power, but results in increased threat to world security and destruction of US influence on geopolitics.  Other countries are now taking a more pronounced and leading role in cooperating with international affairs because of the lack of trust in the US.

The way the system operates now is different but has the same results.  The corporations convince governments to give them favorable tax and regulatory treatments.  It is the US taxpayer who pays for the corporate subsidies.  Money that is diverted from public institutions go to corporate funds.  The corporations love receiving social programs that support them, but criticize social programs which do not directly benefit them.  International corporations can easy move their production sites to different regions, as such, the corporations have huge bargaining power to influence governments to support their corporate views.

The book has a few problems which reduce the credibility of the claims made.  1) Written in a way that is very sympathetic of the author.  The author keeps claiming that he felt bad about his participation in the system, and that it was his guilt that made him change and write about the system.  Although he sometimes describes the benefits he received, it seems that the author wants forgiveness.  The situation is indeed complex, but the way it is written seems like many times the sympathy is meant to remove himself from his actions.  The continuous sympathizing tries to guilt the reader into making him a hero who was fighting against the system, which makes the sympathy seem credulous.  He participated in a system that made him wealthy and continues to use the money generated from the corrupt system.  The use of the money for institutions which help people seem to be justifications for the wealth to appear acceptable.  2) Many chapters are written about international affairs.  The reader will be introduced to geopolitics at its worst.  The problem is that there seems to be a lack of evidence and details around the events.  The lack of information makes the situations appear conspiratorial.  The author does acknowledge the conspiracy feel of the events, and does provide additional sources.  The extreme duality of the descriptions makes them appear credulous.  Believing the sequences of events is easy for someone who already has a negative view of US policies, with this book providing further justification.

Questions to Consider while Reading the Book
•What is the raison d’etre of the book?  For what purpose did the author write the book?
•What is an Economic Hit Man (EHMs)?  What is their purpose?
•What happens to the debtor country’s economic position after accepting the loans facilitated by the EHM?
•Why do countries accept large loans that they cannot reply?
•Who benefits from the loans?
•How are the economic models created?  What role do they serve in the loan process?
•Why does the system of EHMs exist?
•What is government’s role in EHMs?  What do government benefit from using EHMs?
•How do corporations benefit from EHMs?
•What is the corporatocracy?
•How do the EHMs themselves justify what they do?
•Why does the US circumnavigate international laws?  How does the international community react to these acts?  How do US citizens react to these acts?
•How has the EHM system changed?  What makes an EHM recently?
Book Details
Edition ISBN:  9781626566767
Pages to read:   337
Publication:     2016
1st Edition:      2004
Format:           eBook
Ratings out of 5:
Readability    5
Content          3
Overall           4
at January 24, 2021