Review of The Expansion of Elizabethan England by A.L. Rowse

Book can be found in:
Genre = History, Empires
Intriguing Connections = Get To Know This Worlds' People, Regions, Cities, Nations, and Empires (United Kingdom) 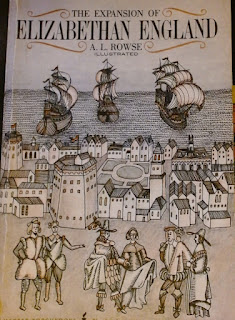 During the expansion stage of the British empire, they began to govern more regions.  Regions that were more centralized, and similar to the British, accepted the rule much easier, without much hardships.  Other regions that were decentralized, and very different from the British, had terrible fighting causing devastation and misery.  Without some similarities or agreements, there is a propensity for conflict.  The raiding and reprisals escalate the damage.  But after the fighting, the land became productive, and people were able work themselves out of poverty.  The British empire started with a terrible navy and army, but to compete and defend its regions, was able to develop their military and naval might.  The expansion brought with it economic prosperity, industrial development, efficiency in bureaucracy, and more power to the people.  The author takes a more neutral approach to history, and away from the ideological certainties that cause others to die for someone else’s ideals.

This book is very difficult to read.  There are many details given, but not enough about what they mean, and how they go together.  The details themselves are hard to understand without an appropriate background.