Book can be found in:
Genre = History
Intriguing Connections = 1) The Persecuted and The Persecutors, 2) What It Means to be an Activist,
3) Get To Know This Worlds' People, Regions, Cities, Nations, and Empires (United Kingdom) 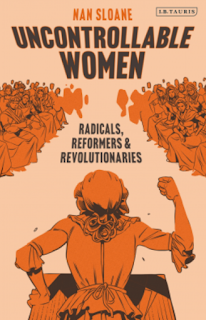 During a time and place that women were supposed to leave politics to men, many women became activists.  Taking up causes, promoting them, fighting for them, and even dying for them.  Politically active not just for voting rights, but also politically engaged for various other causes, such as freedom of thought and the political structure.  As these women were breaching the social structure of the time, they were persecuted.  Women were oppressed structurally rather than accidentally.  Value systems change with time, with this era being framed by religion and class which influenced the way these women thought about others, as the women in this book held narrow-minded ideas about other people, even other women.  Along the way, a demystification of life for women at the time.  In many of the cases, the women were forced by circumstance to become radical activists as alternatives were not available.  In others, women accepted things as they were.  Providing an account of the social and political circumstances of the time.

The book can sometimes be a bit difficult to read.  Having background knowledge in British history during the 18th-19th century would be very helpful in understanding many of this book’s topics and references.