Book can be found in:
Genre = Novel, Science
Collection: Galactic Empires: Seven Novels of Deep Space Adventure
Intriguing Connections = 1) Once Upon A Future, 2) Adventures Of The Space Faring Kind 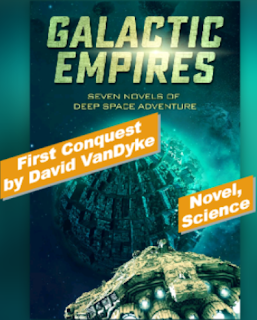 Until now, humans have been under assault by the Meme empire.  Now humans are taking up the offensive.  Sending the starship Conquest on the first conquest of another stellar system.  This war is being told from a Meme Empire leader SystemLord, and various human perspectives.  Containing the different cultural attributes and military strategies employed.  The traps, decisions, and the gambles made.  But the underlying theme of the book is how to treat others, specifically those that appear to work for the enemy.  The Meme is ranked biologically, creating persecution of blends and native populations of the system called Hippos.  Can these seeming enemies be turned into potential allies?  The consequences of making the wrong decision means servitude to the Meme Empire.  This is a story of the difficult sacrifices that might be needed to survive.  This is a story of the impact of persecution.

This is a fast-paced book in which a lot is going on and the various perspectives sometimes change quickly making it a bit difficult to keep track of what is going on.