Review of The Clash of Economic Ideas by Lawrence H. White

Book can be found in:
Genre = Economics
Intriguing Connections = 1) Learning Economics: Basic to Advanced,
2) Capitalism, Socialism, their Alternatives and Critiques 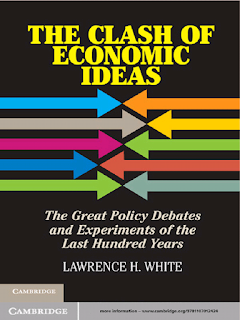 Economic ideas clashed on the role of government and the process of competition.  Discussing the different roles of monetary policy to economic crisis management.  Many of the ideas were taken up by governments, creating experiments which determined which ideas had merit and problems.  All ideas presented had problems with application.  What matters is how to ameliorate the ideas.  Not only are economic ideas disputed, but whether economic ideas themselves hold value.  From those that consider them useless given that those in power will utilize policies which are then adopted by academics who maintain the views.  To application of even derelict ideas to the detriment of policy.  No matter the claims of economists, many ideas and policies persist, even those that contradict their claims.  While academics discuss the economy as is, policy advice is laden with what the economy should be.

Socialism is normally described as government control over various aspects of the economy.  But there are different techniques involved in commanding the economy.  Capitalism is normally described leaving the economy in the guidance of private control directed by profit and loss.  But there is a need to delineate capitalism guided by the government known as state and crony capitalism from the guide of free market as free-market capitalism.  Those promoting decentralized ownership with competitive markets wanted them for the benefit of workers and consumers, not businessmen.

The price system enables coordination between individuals.  When the Bolsheviks outlawed private property, they removed the price system which led to economic disaster.  As the alternative was starvation, many sectors of the economy readmitted market exchange, which improved economic conditions.  The profit system decentralizes production decision makers, while discouraging wasteful decisions.  The market economy acts as a discovery mechanism of alternative options.

The book is sometimes well written, other times more difficult.  The problem is that for some chapters and ideas, it is less a clash and more a bash of ideas.  In which the perceived wrong idea is not necessarily given an appropriate understanding to what the idea entails, and as to why there were individuals who believe them.

Questions to Consider while Reading the Book
•What is the raison d’etre of the book?  For what purpose did the author write the book?
•Do economic ideas have value?
•What is the appropriate role for the government?
•What is socialism?
•What is capitalism?
•What happens when government take too much control of the economy?
•What happens when markets take too much control of the economy?
•What influence did economic ideas have on policies?
•Were the policies that used the economic ideas, use them appropriately?
•Why is there disagreement between economic ideas?
•What were some monetary policy disagreements?
•What were the different views on the making of an economic crisis?  How did economists want to resolve economic crisis?
Book Details
Edition ISBN:  9781139366038
Pages to read:   494
Publication:     2012
1st Edition:      2012
Format:            eBook
Ratings out of 5:
Readability    4
Content          3
Overall           3
at November 22, 2021