Review of A Case of Blackmail in Belgravia by Clara Benson

This review was written by Eugene Kernes
Book can be found in:
Genre = Novel, Mystery 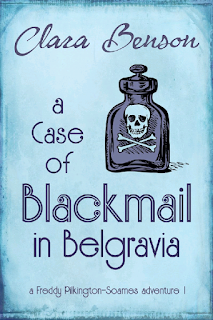 Nicolas Maltravers, known as Ticky, is celebrated by most and is invited everywhere, but it’s not sure how he got that status.  After a birthday party, Ticky dies due to poison.  The suspects are the guests of the party.  One of whom is Freddy Pilkington-Soames mother, Cynthia.  Freddy is a press-man at a newspaper but forced to be a detective to try to understand the why of the murder, and who the murderer is.  Doing his best to cover for Cynthia whose subversive and evasive behavior only makes her appear as the culprit.  It turns out that there was plenty of motive to murder Ticky as Ticky was blackmailing all his friends.  Moral dilemmas abound as although relief was brought through a murder, what should be done about the murderer if found?

Although everyone makes errors, in a society that prices the social pristine appearances, those errors are well worth hiding.  Holding on to errors not only allowed others to blackmail the individual, but also exacerbates the error.  Making it more and more difficult to acknowledge publicly as they stop being small errors.  Blackmail does not stop with the even the death of the blackmailer, as the blackmail can still exist in the hands of others, or be searched for by the police.

Although generally well written with many interesting moral dilemmas and uncertainties, some parts of the book are slow placed.