Review of The Story of the Goths by Henry Bradley

Book can be found in:
Genre = History, Empires
Intriguing Connections = Get To Know This Worlds' People, Regions, Cities, Nations, and Empires (Goths) 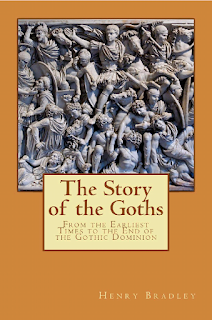 Short Description
Excerpts
“Thousands of Gothic prisoners were sold into slavery; many of the young men were taken to serve in the imperial armies; and the shattered remnant of the people fled into the recesses of the Balkan mountains, where their numbers were lessened y the cold of winter and the outbreak of a dreadful plague.” – Henry Bradley, Chapter III: Fire and Sword in Asia and Greece, Page 26
“When they came to subdue the empire, it was no longer as savage devastators, but as the saviours of the Roman world from the degradation into which it had sunk through the vices of corrupt civilization, and through the misgovernment of its feeble depraved rulers.” – Henry Bradley, Chapter III: Fire and Sword in Asia and Greece, Page 26
“Probably we have lost little by this silence of the historians; for the story of an uncivilized people does not contain much that is worth telling, when there are no battles or migrations to record”” – Henry Bradley, Chapter IV: How the Goths Fought With Constantine, Page 28

There are two Gothic peoples whose names stand out in history: Visigoths, and Ostrogoths.  The Goths had many diverse qualities which were even acknowledged by their enemies.  Depending on the situational context, they could be brave, patient, cruel, and tolerant, even while overcoming hardships.  They had many victories and many losses.  From each they learned to become better.  From their losses they learned strategies that could be used in the future.  From their victories they learned what it meant to rule wisely.  Local ties mattered for decisions, but when faced with a struggle they banned together into a massive force.  Their reasons for war inspiring others to join.  With leadership containing a quasi-democratic republic.

Goths had their own alphabet comprised of runes.  Very few could read or write, which meant that writing had an aura of mystery, which is what rune means; a secret or mystery.  Knowledge contained within the runes was kept with a learned caste.  Most Gothic history is unrecorded partly because of the scarcity of literacy, but also because the events that made Gothic history were those of battle, migration, and hardship.  Peace’s evanescence held no events to write about.

At times they had their own kingdom and a quasi-democratic republic government.  With leaders being chosen rather than only dependent on bloodlines.  Leaders needed to be accepted by the communities.  But at times the Goths were ruled by others, and were not allowed to choose their own fate.

The book is a bit difficult to read, with many aspects of the Gothic people seemingly missing.  Hard to understand a society when their social relations are given sporadically, and the peoples’ diversity seem to sometimes contradict.  A good overall history with many details during certain events, but need to be more systematic to understand the Goths appropriately.