Review of Sons of the Conquerors: The Rise of the Turkic World by Hugh Pope

Book can be found in:
Genre = History, Empires
Intriguing Connections = 1) Get To Know This Worlds' People, Regions, Cities, Nations, and Empires (History of Multiple Middle East Nations), 2) The Persecuted and The Persecutors 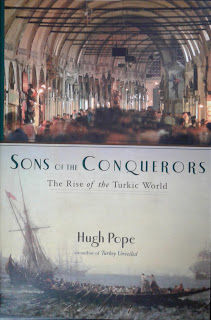 Turkic history emphasized the military’s role.  It is the military that pervades and shapes daily life and politics.  Turks have a violent past which they have trouble apologizing for.  Victims of Turkic conquerors in history, are victimizing their Turkic contemporaries.  In some regions, Turkic people are a majority and discriminate against others.  In regions where the Turkic people are a minority, are discriminated against.  Some regions support the diversity that Turkic people represent.  Turkic people have strong familial and personal ties with each other that even override contractual obligations.  Even though their values support an entrepreneurial culture, rampant corruption restricts economic development.

There is not much to distinguish between civilian and military.  Although ironically the civilians and military occupy different spaces which creates an almost separate economy.  Military officers rarely socialize with their civilian counterparts.  Elite warriors of Ottoman Empire called janissaries made or broke governments.  In the late 20th century, the military still had major claim to policy making.  Staging coups which determined who became took leadership.  The military considers itself main guarantor of Turks’ independence and sovereignty, which many Turks in agreement.

Conscription is universal, while objectors are jailed.  The universal conscription is meant to homogenize the people, teach skills, travel around the country, and learn Turkish.  Ruled through fear.  Few people publicly doubt the military’s motives.  Internal division or problems are handled secretly.  When the civilian government takes charge of basic administration, they tend to not perform well and the military retakes control.  The influence of the military prevents civilian politicians from taking responsibility of their actions, and learning how to manage affairs appropriately without military supervision.  Public service used to be an honorable profession but has become demoralized with lagging salaries.

Turkey itself is a EU candidate member, but both see problems with each other.  Holding vastly different political cultures and value sets.  Resenting the demand of civilian control, and rejecting minority rights.  Turkish people recognize the lack of commitment on territorial integrity of states as Western intervention had devastating impacts on certain regions.

Turks are natural entrepreneurs for their values of risk and personal control.  Willing to establish factories and invest internationally.  Turkish families tend to act as an investing unit and willing to support abroad family members.  Personal ties are critical for investments, as contracts mean little.  Any deal is permanently open for renegotiation, no matter how frank and trustworthy Turks are.  Turkish trade is not a favorable profession as it was held with contempt by the Turkish-Muslin ruling class, as it has been by the 18th century English, or even the Byzantine aristocracy.  Culturally containing rampant corruption as the expectation is not the work the job offers, but the bribes that can be made.

Turkic institutions are changing as they seek external sources of ideas that can be applied to make their societies better.  A willingness to engage with the international community to build better relations, and engage with internal community to provide more stability.

A problem with the book is that the history of the Ottoman Empire is sporadic and superficial, making difficult to engage the continuity of the Turkic peoples.  As the book focus on a very short timeframe, and few examples from various countries, it makes it difficult to generalize the experience for the various communities.  The examples do highlight various experiences of the Turkic people, but understanding is difficult without the depth of diverse informational sources.

Questions to Consider while Reading the Book
•What is the raison d’etre of the book?  For what purpose did the author write the book?
•Who are the Turkic people?
•What role does military play in the Turkic societies?
•What are the relations between Turkic people and other?  With China?  With Russia?  With the US?  People within their communities?
•How do family ties influence communities?
•Is Turkic culture entrepreneurial?
•How is trade perceived?
•How is dissent handled?
•How did the historic Ottoman Empire influence contemporary situations?
•Are Turkic communities changing?
•How does the EU and Turkey perceive each other?
Book Details
Edition ISBN:  9781585678044
Pages to read:   389
Publication:     2005
1st Edition:      2005
Format:           Hardcover
Ratings out of 5:
Readability    5
Content          4
Overall           3
at August 15, 2021