Review of The Gene: An Intimate History by Siddhartha Mukherjee

This review was written by Eugene Kernes
Book can be found in:
Genre = Science, History
Intriguing Connections = The Evolution of Evolution 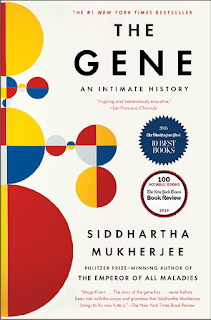 To understand life, requires an understanding of genes.  The gene is a basic building block of life.  Representing biological information.  Instructions for processes.  This book follows every step on the way to understanding genetics.  From homunculus to evolution to the double helix.  Each step had many missteps which raised many questions.  But with very hard work, greater understanding of genetics was achieved.  From an abstract idea to physical representation to manipulating genetics.  Science is a tool which depends on how it is used.  Genetic treatments are mired in the tragic history of eugenics.  Fixing risky DNA can lead to many positive results, but genetics are complicated with still so much that is still needed to learn.

There were many early ideas about hereditary.  During a time, hereditary theories challenged dominant narratives of creation so their investigations were suppressed.  Over time the ideas were permitted which precipitated with evolution.  Adaptation to nature.  Evolution did not explain everything in heredity, as one concern was with blending of the genes.  This led to Mendel empirical tests in which the understanding of dominant and recessive genes came about.

Eventually the heredity transmission would become applied, called eugenics.  Galton used to term eugenics as artificial selection of genetic traits to better humanity.  There seemed to be benefits to the application coming from the Americans, but many saw potential problem with eugenics which was a culling of the species.  A preventative measure from perception that inferior breed of humans could lead to disaster.  Others saw another tragic future which envisioned a homogenies people in whom many of the things that were considered weaknesses are bred out, to the detriment of society.  Nature produces diversity so that there would be no systematic problems with everyone, but the eugenicists desired a pure society.  Without diversity, species can lose the ability to evolve.  Germany later used what they learned from the eugenicists in America to racially clean Germany, which was a dominant feature of their strategy during WW2.

Next came finding the location of genetics, in chromosomes.  Looking for the determinants of a phenotype followed.  This is part of where complexity of DNA takes place as a genotype, environment, triggers, and chance all collude to provide a phenotype.  The variations determine the organisms’ attributes.  Variations in genetics are called mutations.  Mutations are neither superior or weaker, but are adapted to a particular environment.  What seems fit in a given environment can be illness in another.  What matters is a match between the organism and the environment.  It isn’t the number of genes that matter, but the sophistication of the gene networks.

With technological improvements came gene editing.  Using bacteria as a transmitted of DNA, impaired DNA can be repaired.  The eugenicist past haunts genetic manipulation.  Although there are overwhelming ethical questions with gene editing which most scientists are decrying, there are some cases in which gene editing was permitted.  It appears that eugenics no longer has the culling effect, but it may cause people to alter future people’s gene for specific perceived benefits.

With the understanding of genetics, many scientists looked for social causes in genetics.  From intelligence to gender.  Even though meticulously studies, the genetic causes of particular social inclinations need to be better understood.  Genetics may have some influence in the choices made, but it is drastic to say they explain the choices.

It is interesting to note that DNA is patentable.  Although DNA is not an invention, it is patented.  After Venter gene patent, there was a land grab for genetics.  Now, many parts of the DNA are owned by various corporations in different countries.  This means that many cures and diseases cannot be studies because of legal issues of owning the information.

An issue with this book is that it focuses too much on genetics being the cause.  Although Mukherjee shows the complexity of genetics, the problem is that it is written in a deterministic manner.  Sometimes, when showcasing the complexity is important, the author just writes what happened.  There are also some scientific method problems of looking at just genes such as confirmation bias and round-trip fallacy.  The narrowness of the studies causes the scientists to miss a lot of the information that they are not looking for.  The book is generally well written, but sometimes, it requires background knowledge of genetics to understand how everything fits together.