Review of Capitalism in the Web of Life: Ecology and the Accumulation of Capital by Jason W. Moore

Book can be found in:
Genre = Economics, Ecology
Intriguing Connections = Capitalism, Socialism, their Alternatives and Critiques 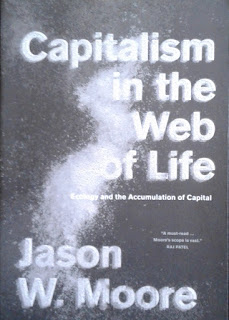 Short Description
Quotes
“Capitalism’s governing conceit is that it may do with Nature as it pleases, that Nature is external and may be coded, quantified, and rationalized to serve economic growth, social development, or some other higher good.” –Jason Moore, Introduction: The Double Internality: History as if Nature Matters, Page 2
“Capitalism has survived not by destroying nature (whatever this might mean), but through projects that compel nature-as-oikeios to work harder and harder – for free, or at a very low cost.” –Jason Moore, Introduction: The Double Internality: History as if Nature Matters, Page 13
“We are among the planet’s more effective “ecosystem engineers”; and even so, our civilizations are made and unmade by the environment-making activities of life.” –Jason Moore, Conclusion: The End of Cheap Nature?: The World-Ecological Limit of Capital Is Capital Itself, Page 296
Quotes with permission from publisher
Elaborate Description
The economy and the environment are usually treated as independent of one another.  This creates a problem of seeing nature as an external thing that can be used as pleased, which leads to dire consequences.  Rather, this book shows how capitalism organizes nature.  Moore uses the term oikeios to express the relationship between species and the environment.  Rather than seeing humans and nature, its humanity-in-nature.  A way to internalize what is normally thought of external.  Nature is not just an objects humans act upon, nor is it just what humans develop through.  It is a relationship in which each impress’s upon and shapes each other.  The interactions between capitalism and nature are important and needed to understanding the outcomes of capitalism-in-nature.
The way capitalism operates is to reuse low to no cost products.  Or rather, to force nature to provide for humanity by working harder and at low cost.  Rather than capitalism working on nature, capitalism works through nature.  Trying to expand the production of surplus value.  Identifying value as what the capitalist civilization deems valuable rather than what actually is valuable.  A constant tangle emerges as nature reacts to the actions of humans, and humans try to obtain what they need from nature.
This book proposes an important concept and a way of thinking, but because of the way its arguments are constructed, makes the concepts feel underwhelming.  Written in a convoluted manner using Marxist terminology, which the author recognizes do not have the same meaning now as they once did.  Applying the same arguments to very different ways of reproducing the economy creates many misunderstandings.  Although the author tries to show case the praxis, the arguments appear abstract rather than practical.  There is much history of the interaction between humans and the environment, but few examples of modern-day activities.  What is needed to make this book an effective transmitter of an important idea, is to make it understood to an audience of more than those who understand Marxist concepts.
Questions to Consider while Reading the Book
•What is the raison d’etre of the book?  For what purpose did the author write the book?
•Is nature external to humans?
•What is the double-internality?
•Why does the relationship between capitalisms and nature matter?
•What is the modus operandi of capitalism?
•What does capitalism find valuable?
•What is there a need for cheap work?
•Why force nature to work harder?
•What is the limit to capitalism?
Book Details
Edition ISBN:  9781781689028
Pages to read:   305
Publication:     2015
1st Edition:      2015
Format:           Paperback
Ratings out of 5:
Readability    4
Content          3
Overall           2
at March 18, 2021