Review of Mayan Civilization: A History From Beginning to End by Henry Freeman

Book can be found in:
Genre = History, Empires
Intriguing Connections = Get To Know This Worlds' People, Regions, Cities, Nations, and Empires (Mayan Empire), 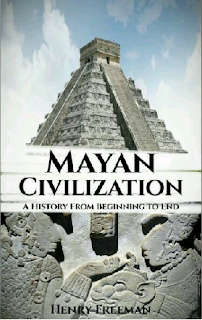 Mayan culture is premised on a yearly cycle between destruction and creation which stems from maize production.  Mayan civilization is ancient but not well know because many of their records were destroyed by missionaries.  What is known is that many states rose and fell before the coming of Europeans.  Their use of the environment and politics doomed them.  Unsustainably used their ecology which prevented a stable nutrient supply.  Going from centralized controlled conflict, to state conquest, to destructive warfare.  Maya leaders continuously ignored problems within their society while trying to showcase their power and status.

Maya had detailed historical records of their history but the majority of the records were destroyed by Spanish missionaries.  Many Maya images and books were defaced or burned by missionaries who perceived the works to be heretical, heathen.  The surviving records from political state clashes show their leaders describing their victory and reasons for the clash in ways they wanted themselves to be represented.  The intellectual history show mastery in math and astronomy which was used to chronicle events.

As the Maya grew in population, they became more politically centralized.  Hierarchal social structure.  Politically ruled by chiefdoms whose chiefs were perceived to hold supernatural contracts or abilities.  The Maya people are generally perceived as having respect for nature, but the Maya have also caused environmental damage.  Part of the collapse of the Maya is in their overused of their environmental infrastructure.  Maya population contained many elites who continued to demand more from the population even with eroding environmental conditions.

Although the Maya were seen as fractured independent states, they were seen as being peaceful with each other.  Further research showed that the fractioned Maya societies had frequent clashes.  The Mayan culture survived the collapse of centralized political system.  By the time Columbus reached the New World, the Maya were politically less centralized and had frequent warfare.  An attempt was made to unify Mayan factions to overcome the Europeans, but alliance attempt failed to rein in invaders.  In the process, the capital of Tenochtitlan was destroyed.